From the “Horribly Misguided” file: Gabriel Sherman of New York Magazine is reporting that NBC, in a desperation move, sought to snag the host of Comedy Central’s Daily Show, Jon Stewart, to helm their Sunday morning news gabfest, Meet The Press. Sherman writes that…

“Before choosing [Chuck] Todd, NBC News president Deborah Turness held negotiations with Jon Stewart about hosting Meet the Press, according to three senior television sources with knowledge of the talks. One source explained that NBC was prepared to offer Stewart virtually ‘anything’ to bring him over.” 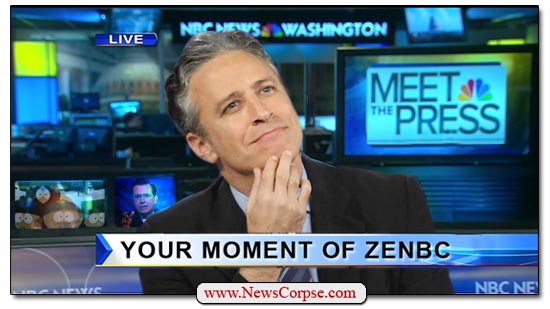 What on Earth are these people thinking? Stewart is an inspired media satirist with a unique ability to shine a light on the absurdities of newscasting and the Stepford characters who present the parade of establishment-approved stories. And certainly his popularity with a young and coveted demographic might set the network honchos’ tongues to wagging. But there are so many obvious reasons that this would be an epic disaster that it’s incomprehensible that they would seriously consider it.

First of all, having a substantive, long-form discussion about issues that impact the nation and the world with the people that actually make the decisions is very different than exchanging snide, albeit often poignant, comments for a five or six minute segment of a comedy program. While Stewart is often better informed, and capable of making more relevant observations, than the cast of the current Sunday news shows, the tone of his presentation is entirely inappropriate for the type of programs that air on Sunday morning. And it is his voice, with a thick layer of “what the fuck” over a bewildered mug that makes him popular. He could not get away with that on Meet the Press.

Secondly, whatever ratings score NBC hoped this move would achieve is completely illusory. Let’s face it, Stewart’s fans are not going to get up that early on a Sunday to watch him be serious with a bunch dead-panned politicos and pundits. And the typical, “mature” audience for these shows wouldn’t stayed tuned to Stewart for very long.

Finally, did NBC forget that Stewart’s interviews are only a small portion of the Daily Show. Most of the program consists of comedy monologues and canned bits from his “correspondents.” And all of that material is plotted by a staff of ten or twenty talented comedy writers who help to make Stewart the genius he appears to be. It seems unlikely that NBC would have put all of them under contract to their news division had Stewart signed on.

It’s hard to believe that the prospect of Stewart accepting a position as one of the talking heads that he so masterfully skewers could ever have been taken seriously. It makes no sense from either a journalistic or a business perspective. What would come next? Bill Maher hosting Face the Politically Incorrect Nation? This Fuckin’ Week with Chris Rock? And poor Fox News Sunday, they would be stuck with Dennis Miller (or for a real comedy coup, Sarah Palin).

2 thoughts on “Your Moment Of ZENBC: NBC Tried To Recruit Jon Stewart To Host Meet The Press”