When you’ve spent your whole career producing feverishly partisan videos that have been denounced as brazenly deceitful by everyone from Rachel Maddow to Glenn Beck, it isn’t particularly newsworthy when a new one is posted that exhibits the same pattern of deception and reeks of the pathetic amateurism that has become your trademark. 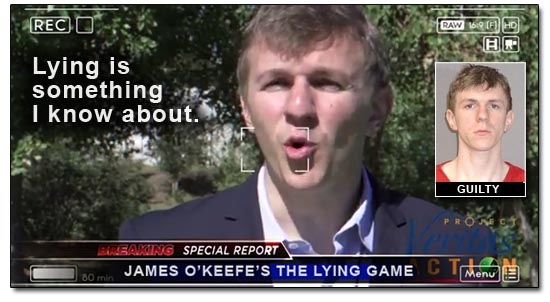 Of course we’re talking about the infantile news defiler, James O’Keefe, who seems to have no limit to the copious quantities of shame he can endure at his own hand. This week he debuted his latest ode to defamation (video below) aimed at slandering Democratic Kentucky senate candidate Alison Lundergan Grimes. The video purports to cast Grimes as a cynical and hypocritical politician who will say anything to get elected. Setting aside the naivete of that theme when discussing politics, O’Keefe’s opus fails utterly to prove its contention. You have be pretty incompetent if you can’t successfully find some self-serving duplicity in any modern politico, but O’Keefe manages to hit that elusive mark.

As has been the case for his most recent efforts, they are ignored by reputable media, but picked up by the wingnut press like the Free Beacon, Breitbart News, and the Fox News community website, Fox Nation. In the introduction to his dubiously named Project Veritas video, O’Keefe says that…

“Project Veritas Action went undercover in multiple Grimes campaign offices to determine if her opposition to the core principles of her own political party is genuine or an intentional deception.”

On one hand, it might seem like O’Keefe would be the perfect sleuth to uncover “intentional deception” given his personal experience as a prolific producer of it. However, the only thing that O’Keefe manages to do is surreptitiously record a parade of Grimes supporters offering their own opinions of what may or may not be on her mind. These folks are well-meaning and sincere backers of Grimes’ candidacy, but they are also gullible and unsophisticated in the unscrupulous ways of snakes like O’Keefe. Consequently, they got caught saying that they don’t believe that Grimes’s commitment to the coal industry in Kentucky is genuine.

This is the sort of raw meat that sets O’Keefe and his fellow vultures to frothing at the mouth. But to anyone who takes an open-eyed view of the material, there is really nothing of substance about which to get excited. The people that O’Keefe’s minions hoodwinked had no official responsibility for the Grimes campaign messaging. They were not speaking for her and did not represent her positions. Furthermore, they had no inside knowledge of any private thoughts she may have, and they did not profess to be clairvoyant.

The innocent subjects of O’Keefe’s hoax were merely projecting their own opinions on Grimes and expressing their own desires for what they hoped she might do after being elected. It has no more credibility than the lunacy of Ben Carson surmising that President Obama is plotting to cancel the 2016 presidential elections. And the project is further discredited by the tactics used, wherein O’Keefe’s plants pretended to be anti-coal advocates to elicit accommodating agreement from their prey. O’Keefe’s operatives are not campaign “trackers” who objectively record speeches and other public events in order to hold candidates accountable. They are con artists and hustlers who aim to entrap their victims into saying something that can be twisted out of context in the editing room.

It is also notable that O’Keefe posts videos that are heavily edited. The viewer has no idea if the subject’s remarks were premised with a phrase that altered the meaning. For instance, someone might say “…Alison Grimes is anti-coal.” But if that sentence began with the words “Critics falsely believe that…” it has an entirely different meaning. That’s what dishonest editing can do. It can also remove comments that don’t fit the premise that a biased videographer is trying to push. So O’Keefe may have interviewed dozens of people who said only positive things about Grimes, but he left them on the cutting room floor and posted only the handful whose words he could exploit.

A response to this phony video has already been issued from the campaign of Grimes’ opponent, Sen. Mitch McConnell. Seizing on the opportunity to exacerbate the dishonesty, McConnell’s spokesperson said…

“It is absolutely shocking that Alison Lundergan Grimes‘ own staff now admits that she has no intention of protecting the coal industry. The level of deception that Alison Grimes and her campaign engages in to appear pro-coal despite obvious opposition is both disturbing and dangerous.”

What’s shocking is the level of deception of McConnell’s spokesperson who knows very well that none of these remarks came from Grimes’ staff and they do not represent her position. The spokesperson is flagrantly lying. In contrast to this intentionally deceptive hogwash, there was a prior incident in the Kentucky race that has real substance and was not manufactured. A telephone call between McConnell’s campaign manager, Jesse Benton, and an associate was recorded and released to the press wherein he confessed that he wasn’t especially fond of McConnell, but had an ulterior motive for heading up his campaign:

“Between you and me, I’m sort of holdin’ my nose for two years because what we’re doing here is going to be a big benefit to Rand [Paul] in ’16.”

That was an unprovoked statement from one conservative operative to another. There was no deception involved in soliciting it. The motivation for making it public is unknown. Perhaps Benton’s pal was a supporter of Matt Bevin who, at the time, was running against McConnell in the Republican primary. But there is no similarity between this disclosure and what O’Keefe does. The speaker was not some tangentially related volunteer, he was McConnell’s campaign manager. And he wasn’t tricked by a scammer into revealing his opinion. To cap off this affair, Benton later resigned in disgrace from McConnell’s campaign after it was revealed that he played a role in a political bribery scandal in the 2012 GOP Iowa primary.

You gotta check out this awesome ebook…
Get Fox Nation vs. Reality. Available now at Amazon.

For the record, here is a boilerplate background on James O’Keefe:
O’Keefe is best known for making an ass of himself on video while imagining an acclaim that is shared by no one outside of the Tea Party Home for the Chronically Delusional. Some of his other recent antics have resulted in his arrest and conviction in a Louisiana senator’s office, a legal order to pay a $100,000 settlement to a former ACORN employee he defamed, and a sleazy plot to seduce a CNN reporter aboard his “Love Boat.” More recently his “Cinema Veri-tasteless” earned him a rebuke from a team of Special Prosecutors in Texas (yes, Texas) who officially concluded that his video “was little more than a canard and political disinformation.” And he staged a remarkably juvenile stunt wherein he crossed the Rio Grande wearing an Osama Bin Laden mask.