The 800 pounds of gorilla ego that is better known as Bill O’Reilly of Fox News, is bitterly dismayed by the refusal of Dr. Tom Frieden, Director of the U.S. Centers for Disease Control, to accept his invitation to be abused for eight minutes on The Factor. 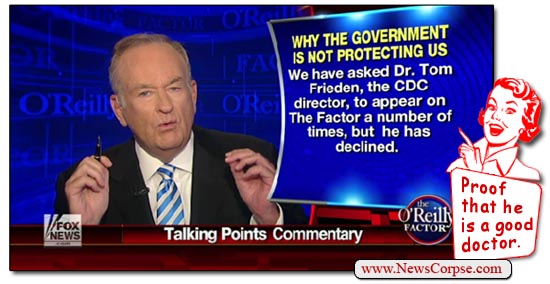 O’Reilly believes that since he is the only living entity with the superpowers necessary to unravel the heinous plots that public health officials are devising to wipe out western civilization, submission to his brand of ignorant battering is mandatory for continued service. That’s why O’Reilly devoted his program’s opening Talking Points segment to lecturing the absent Dr. Frieden and calling for his resignation.

“We have asked Dr. Frieden a number of times to appear on the Factor. He will not because he is afraid. He knows that I know he’s not being candid, that he is spinning the situation and not being forthcoming about how the disease is being spread. Frieden should resign.”

Notice that O’Reilly never explains what Dr. Frieden is not being candid about or how Ebola, in his warped imagination, is actually being spread. And without any factual basis he called Dr. Frieden the government’s chief propagandist. This is typical O’Reilly intimidation tactics. He routinely accuses anyone who declines to be browbeaten on his program of being afraid of him. Of course, there are many good reasons to refuse his invitation, not the least of which is that he is an ignorant and hostile host with an inability to grasp any logic that conflicts with his pre-chewed biases. That’s the only thing scary about O’Reilly.

So now O’Reilly is terribly concerned that some horrible secret is being kept from the American people. He seems to think that Ebola is spreading by some undisclosed method that will ultimately put everyone at risk of certain death. He asserts that a second case of Ebola (count ’em, two) in Dallas is proof of a budding pandemic that threatens to engulf the nation, and that “Americans are rightly concerned that their government will not protect them.”

The segment’s headline, “Why The Government Is Not Protecting Us,” paved the way for O’Reilly to float a bunch of loony conspiracy theories alleging that we are not being protected, but he failed to answer his own question as to why. Is it because Obama wants to punish America for slavery as Rush Limbaugh says? Is it so he can declare martial law, throw people into FEMA concentration camps, and cancel the 2016 elections, as Ben Carson asserted? Or is he simply evil and wants to see people suffer as he fulfills his mission as the Anti-Christ?

O’Reilly never bothers to say why Obama would deliberately neglect his duty to protect the nation, even though that was the premise of the whole segment. However, he does make a bold prediction saying that…

“Talking Points is just asking for common sense, which the Obama administration is rejecting outright. But I will predict tonight, they will soon reverse course.”

Specifically, O’Reilly was referring to whether or not there should be a travel ban on Ebola-infected countries, which he neglects to realize includes the U.S. (The faulty reasoning for a travel ban was covered after “doctor” Keith Ablow, another Fox News crackpot, suggested it). But a quick recap of O’Reilly’s track record with predictions exposes a pitiful success ratio. For instance, he predicted that his program would have higher ratings than President Obama’s State of the Union address. He was wrong. But my favorite flub was when he insisted that the Supreme Court would strike down ObamaCare and that he would replay his prediction and admit he is an idiot if they didn’t. Of course the Court did not strike down the law, but O’Reilly never apologized or admitted his error or his obvious idiocy.

If refusing to appear on the O’Reilly Factor is justification for forcing someone to resign from their job, then 75% of the government should be dusting off their resignation notices. Fortunately, the reverse is a better gauge of an effective public servant. That is, anyone who is smart enough to turn O’Reilly down is automatically regarded as being better suited to public service as evidenced by their good judgment to snub him.

5 thoughts on “Bill O’Reilly’s Ebola Ultimatum: CDC Chief Must Appear On My Show Or Resign”