There is a debilitating pandemic that is rapidly spreading across the nation and infecting millions of Americans. What’s more, it is airborne and spread indiscriminately by irresponsible entities that are licensed by the government.

It isn’t Ebola. It is Ebola-Phobia – the irrational fear that an extremely difficult to acquire viral fever is threatening every man, woman, and child in America. The transmission vehicle for Ebola-Phobia is a common carrier known as television news. And a new survey has revealed that the more one is exposed to an infected news source, the more likely the virus will spread, and the more serious the consequences for those infected. As reported on NJ.com…

“Those who claim to be following the outbreak the most closely also have the most inaccurate information about it.

“For example, people who are paying a lot of attention to Ebola are twice as likely to hold the erroneous belief there is effective medicine to treat it. They are also more likely to believe it is spread easily, even though the deadly fever is less contagious than the flu.”

This is a shocking development. How can it be possible that accumulating more information about a news event results in being less informed about it? That is the exact reverse of what ought to be the case for conscientious news consumers.

The problem rests primarily in the fact that the news producers are not particularly conscientious. They are deliberately stirring up panic and contributing to a wholly irrational hysteria. For instance, take a look at this headline from the Fox News community website, Fox Nation: 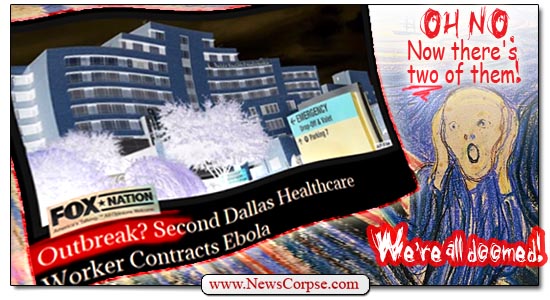 For more proof of the toxic nature of Fox’s lies…
Get Fox Nation vs. Reality. Available now at Amazon.

Outbreak? Is that an appropriate characterization of a viral infestation that has grown to engulf fewer people than can fit into a Mini-Cooper? It is if your purpose is to frighten rather than inform. Fox News and other media outlets may be more interested in curing their ratings deficiencies than in delivering factual data.

In addition to the survey from New Jersey, a national poll by the Harvard School of Public Health was recently concluded that shed some light on the adoption of misinformation by the American people.

There is a disturbing inference from the combination of these two studies. It tells us that people with less education who watch more news are the most likely to have incorrect impressions of the facts. It has already been established that Fox News ranks near the bottom of all news sources for education level of its audience, and it is the most watched cable news network. That sets the stage for a massive epidemic of ignorant panic over Ebola (or ISIL, or Benghazi, or ObamaCare, or the IRS, or gay marriage, etc.). And the proof of this rests in surveys that confirm that the more one watches Fox News, the more misinformed one is.

The fact that Fox News would portray the discovery of a second Ebola patient from the same Texas facility that produced the first one as an “outbreak,” shows how deliberately dishonest they are. Next they will probably report that the infection rate has increased by 100%. And while that’s technically correct, it obviously doesn’t advance the understanding of what is occurring. And that is what Fox intends to do with so much of their reporting – impede the advance of understanding.

[Addendum] Shortly after this was published, Fox News Anchor Shepard Smith delivered a rare and inspiring commentary that put Ebola into realistic perspective. It’s a must read/watch.

One thought on “OUTBREAK: Millions of Americans Exposed To Ebola-Phobia By Hysterical Media”