There is almost no one in political punditry who has been more wrong, more often than Dick Morris. He was excommunicated from the Fox News family after he laughably predicted a landslide victory for Mitt Romney just a few days before his landslide loss. He later admitted that he was lying about his prediction in order to boost the Romney campaign. But perhaps the best example of his cluelessness was his book “Condi vs. Hillary,” in which he predicted that they would be the candidates in the 2008 election. But Morris got the Democratic nominee wrong; he got the Republican nominee wrong; and the Republican who Morris said could win if he were nominated (McCain) actually was nominated and lost. He couldn’t possibly have been more wrong.

How this cretinous loser ever gets asked to pontificate on anything is a mystery. It would be difficult to come up with an example of anything he ever got right. And now, as if to cement his reputation as a recidivist crackpot, Morris is claiming that “Hillary Clinton Orchestrated Panetta’s ‘Hit’ On Obama.” And the nutballs at Fox Nation giddily published it. 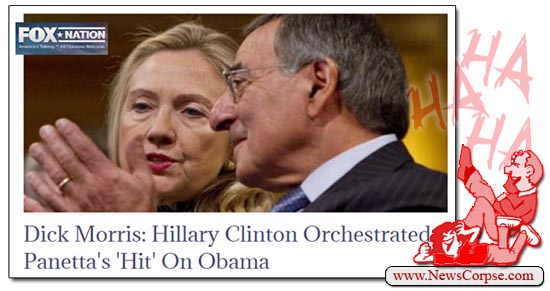 Is he FRIGGIN’ kidding? This is such an absurd and unsubstantiated piece of nonsense that it elevates Morris to new heights of idiotdom. The notion that Panetta could be coerced into doing Clinton’s dirty work against President Obama, who made Panetta both Secretary of Defense and Director of the CIA, is ludicrous on its face. Likewise, the notion that Clinton has some sort of vendetta against Obama for which she is recruiting surrogates to deploy makes no sense whatsoever.

If Clinton decides to run for president in 2016, she is going to want a reserve of goodwill for the Democratic Party and its leader for eight years, Barack Obama. She is going to want to run on the successes of the Obama administration, including restoring an economy that was in full collapse, signing the first-ever health care bill, reducing unemployment from 10% to less than six, and so much more. The last thing she would want is to run against a president of her own party who was made to look bad by her own Machiavellian tactics.

In short, the theory Morris is floating can only be seen as credible by a complete moron who knows nothing about politics. That explains why Morris likes the theory. But there is something even more ridiculous in this drooling gibberish that Morris can’t possibly have noticed.

By casting Clinton as the mastermind of a clandestine plot to sink Obama, Morris has affirmed her status as a powerful, resolute, and effective leader. He is asserting that she can push around a former CIA chief, even though she currently holds no reins of power. That is a fairly positive endorsement of her leadership skills.

What’s more, Morris contends that the purpose of Clinton’s plot is bring down a president who is despised by the right-wingers who are expected to oppose her candidacy. That, of course, would immediately make her more appealing to those who would otherwise be her natural enemies. If Morris were right, then all of the people who hate Obama would have a new-found appreciation for Clinton, thus boosting her electability.

Obviously, it is not Morris’ intention to help Clinton in any way. He is just too stupid to understand the ramifications of his own blithering drivel. But the rest of us can enjoy the comic relief he provides by embarrassing himself so publicly every time he opens his scummy mouth.