In his Talking Points Memo segment last night, Bill O’Reilly demonstrated his overt bigotry along with a pitifully shallow analysis of public polling. He cited a poll from Politico that found that 64% of respondents from battleground states believe that “things in the U.S. feel like they are out of control.” O’Reilly then reported that the poll also found that if congressional elections were held today, 41% would vote for Democrats and 36% for Republicans.

Uh oh. O’Reilly must now find a reason for that snub of his conservative pals. So he contends that the poll results are illogical and blames the ignorant American people. He can’t understand why anyone would vote for a Democrat if 64% of the people think things are out of control. Let’s help him out. 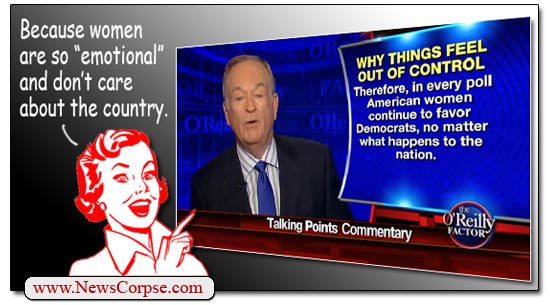 The main problem is that he is assuming that the people who think things are out of control hold the Democrats responsible for it. That is the result of an inherent tunnel-blindness that wingnuts like O’Reilly suffer from wherein everything bad is the fault of President Obama and the Democrats, and that the whole country concurs. In fact, every poll in recent years show that it is Congress that the people hold in contempt with an approval rating of about 12% (compared to Obama’s 41%), and those polls also show Republicans with a much lower approval rating than Democrats. So if the people believe that things are out of control, it is more likely that they blame the Republicans in Congress.

O’Reilly goes on to say that America is “a much weaker country” since Obama has been in office. To make make that argument requires O’Reilly to recall 2008 as a year that the United States had not just suffered the worst financial calamity since the Great Depression. He would have to have forgotten that there were 150,000 American troops slogging through battlefields in Afghanistan and Iraq. He would have to believe that a national deficit more than twice as large as the current one was evidence of weakness. He would have to prefer a nation where millions of Americans were unprotected by health insurance and threatened with bankruptcy and/or devastating medical problems. In short, he would have to be suffering from an acute form of ideological amnesia, because who in their right mind would want to return to the nightmare of 2008?

O’Reilly makes the absurd assertion that voting for Democrats is an act of selfishness and that “if you’re voting for the country, you’re less likely to support the Democrats.” That’s the old right-wing canard of calling your opponents unpatriotic. But it gets even worse. O’Reilly surmises that the reason people favor Democrats is emotion, and he puts the blame for that on women who he says, in effect, are too emotional and/or gullible to know what’s good for them. That, he says, is why “American women continue to favor Democrats, no matter what happens to the nation.”

Can right-wingers really still be confused about why so many Americans regard the GOP as engaging in a war on women? With their banner-carriers alleging that women are emotionally-driven dimwits who don’t care about the country, it seems pretty obvious that women would reject them. Yet the GOP continues to say these sort of idiotic and insulting things out loud, and on national television.

O’Reilly’s confusion as to why anyone would vote for a Democrat would be better expressed as why any woman would vote for a Republican. And that can be extended to why any African-American, Latino, working, or middle-class citizen would vote for the party that regards them as lazy, criminal, moochers, and spends all its time and effort tearing down democratic principles and obstructing progress on behalf of wealthy special interests and partisan prejudice.

7 thoughts on “Bill O’Reilly: American Women Are Emotional, Gullible, And Don’t Care About The Country”