The video below has been making quite a stir for it’s raw approach to feminist advocacy. It is, to say the least, NSFW. It is already being condemned by the right-wing martinets of virtue, but some on the left are also likely to find it, shall we say, extreme. 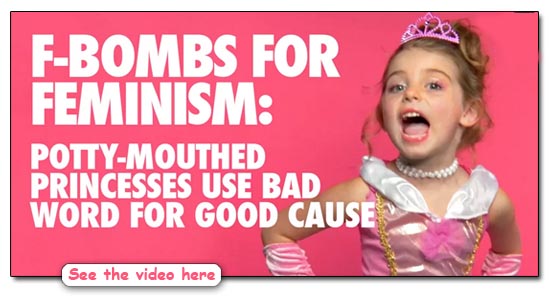 Starting from the position that this video is going to be regarded as controversial, and even offensive in some circles, it nevertheless needs to be seen and the point it makes is a valid one. Personally, I think it’s adorable and the girls appear to be strong-willed, self-determined young activists with a healthy concern for what the world holds for them in their future. The producers at FCKH8.com introduce it by saying…

“Facing a future where women are still paid 23% less than men for the same work, and where 1 in 5 women are raped or sexually assaulted in gender-based violence, little girls between 6 and 13 years-old dressed as pretty pink princesses drop F-bombs to draw attention to society’s continued sexism. Asking the question, ‘What’s more offensive? A little girl saying f*ck or the sexist way society treats girls and women’ these adorably articulate little ladies in sparkling tiaras turn the ‘princess in distress’ stereotype on its head and contrast the F-word with words and statistics society should find shocking such as ‘pay inequality’ and ‘rape.'”

Fox News posted it on their Fox Nation fib factory with a headline that said “VILE: Little Girls Used as F-Bomb Pawns in Pro-Feminism Video.” Naturally, the network that promises to let you decide has decided for you. But that’s not how News Corpse works. So without further ado, enjoy and/or seethe: