Is it time to talk about the epidemic of guns yet?

With shootings in a Washington state high school and in Sacramento, California, the fatalities caused just by these events that the media chooses to sensationalize exceeds all of the fatalities in the U.S. from Ebola since that story began. And that’s not even counting the shootings that occur every day in communities across the country. 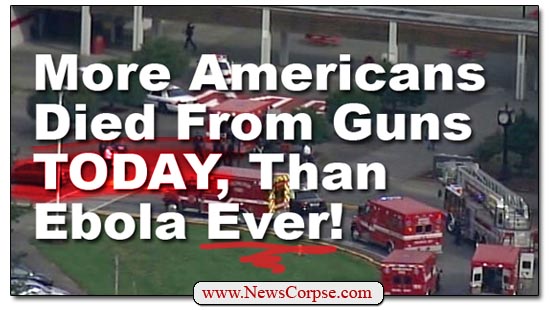 Nevertheless, our politicians and pundits continue to be obsessed with manufactured threats that have a more theatrical appeal, but are in reality a far smaller risk. The likelihood of any American being killed by Ebola or ISIL remains remote, but guns are killing innocent people everyday. The numbers are staggering. Over 30,000 Americans die by gunfire each year, and today’s news reminds us that way too many of the victims are children.

There is a good case to make that the NRA is more dangerous to Americans than Ebola ever was. So is tobacco, influenza, pollution, and lightening. In fact, you are even more likely to die by your own hand (39,000 annual suicides) than to be killed by Ebola. So whatever you do, don’t get on any plane that you are on.

Our representatives have to stop being cowed by the NRA whose sole mission is to lobby on behalf of gun manufacturers. The influence exercised by the NRA far outweighs their actual clout with the public at large. But they continue to hold our legislators hostage. They even have a role in preventing a comprehensive response to Ebola. It is the NRA that coerced members of Congress into blocking the confirmation of President Obama’s nominee for Surgeon General. Now that we need someone in that post, the obstruction continues to prevent it.

With the upcoming midterm elections there is an opportunity to reduce the NRA’s influence in Congress by voting out Republicans in the Senate. The American people need to recognize the importance of this election and resolve to participate and persuade others to do the same. Failing this we can expect the holocaust of gun victims to continue and spread long after the Ebola threat has been forgotten.