Last Tuesday Megyn Kelly of Fox News hosted a segment on what she characterized as a frightening assault on democracy in Colorado as Democrats plotted to surreptitiously turn the “red meat state” blue. Setting aside the fact that Colorado has been a solid purple state for years, Kelly’s alarm was grossly misplaced and indicative of her extreme right-wing bias. She led off with a dire message for her easily spooked audience.

“Breaking tonight. With two weeks to the midterms we are getting warnings that a new law has opened the door to possible voter fraud in a critical senate race that could decide the balance of power in Congress.” 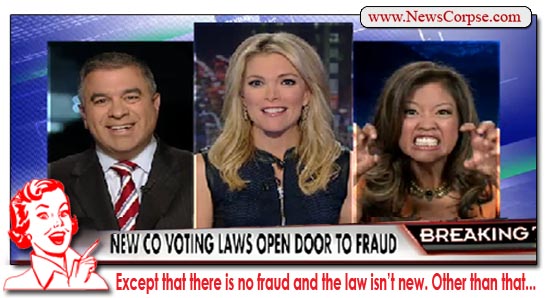 Saints preserve us. What malevolent disaster is looming over us now? Kelly “reported” that Colorado’s Democratic governor and legislature passed a new “first of its kind” law that “literally allows residents to print ballots from their home computers.” And with a chastening glare she facetiously asks “What could go wrong?”

What indeed? Well, the first thing that could go wrong is that Kelly’s reporting is entirely false. When local reporters with KUSA TV contacted Colorado’s Republican Secretary of State he told them that there was no truth to the story. Rachel Maddow covered the misleading reporting by Kelly in a brilliant segment that broke down the shameless dishonesty that is the hallmark of Fox News:

Kelly has still failed to acknowledge or correct her false reporting, proving that the only fraud here is that committed by Fox News on their pathetically gullible viewers. But the story doesn’t end there.

Following Kelly’s thoroughly fictional “breaking” news opening, she introduced her guests Michelle Malkin and David Bossie who were there to promote their new crocumentary “Rocky Mountain Heist,” about alleged voter fraud in Colorado. But before the interview began, Kelly played the entire two minute trailer for the film uninterrupted, giving the deceitful project free advertising worth tens of thousands of dollars.

Malkin said the film unveils a “voter fraud Frankenstein,” but like every other right-wing allegation of voter fraud, she never provides any evidence. And in this case she doesn’t even offer an example of any the fraudulent activity she alleges.

Most appalling is Malkin’s apoplectic complaint that “hundreds of thousands of dollars from unknown donors were poured into these races to target them and turn the legislature blue.” And she has the gall to whine about this supposed assault on democracy while sharing the interview with the man that made unscrupulous political donations possible on an unprecedented scale. David Bossie is the President and Chairman of Citizens United, the organization whose Supreme Court ruling permitted donations from corporations and individuals in unlimited amounts that can be kept hidden from the public.

Bossie also told Kelly that he has no problem with the spending on the part of the Democrats, but complained of a lack of transparency. Talk about hypocrisy. It was his lawsuit that made it all possible and he argued in favor of it when it was to his benefit.

For more examples of shameless dishonesty from Fox…
Get Fox Nation vs. Reality. Available now at Amazon.

So in this one segment of Kelly’s program she proliferated lies about the Colorado elections procedures, contributed valuable airtime to advertise a brazenly partisan documentary, and gave a platform to hypocritical right-wing propagandists to smear their Democratic foes just days before a consequential election. She provided no opportunity for the maligned Democrats to respond or for a representative of the other side to rebut the scurrilous charges. But that is typical of the absurdly tagged “fair and balanced” network that is neither. And it is the reason that Kelly is no better than Sean Hannity, or Glenn Beck, or any of the other ideologically prejudiced Fox mouthpieces past and present.