In another example of the acutely schizophrenic and brazenly prejudiced approach to journalism practiced by Fox News, two recent stories have revealed just how blatantly they peddle their hypocrisy. 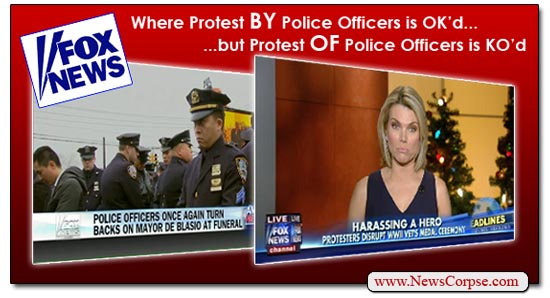 When members of the New York Police Department decided to express their political grievances with New York Mayor Bill De Blasio, they orchestrated the profoundly disrespectful tactic of protesting during the funerals of murdered officers. It was a repulsive strategy that heretofore was only engaged in by the nauseating disciples of the Westboro Baptist Church, whose protests at the funerals of American soldiers were repudiated by just about everyone across the political spectrum.

For some reason, Fox News, and other conservative media, flipped 180 degrees and voiced their support for the officers who turned their backs on the Mayor, turning events that were supposed to be memorials to slain colleagues into political rallies. The majority of Fox pundits and guests (including Bernie Kerik, the former New York Police Commissioner and convicted felon) had no problem with this display of self-serving partisanship at such solemn occasions.

Cut to a town hall in Oregon where a 100 year old World War II veteran was to receive a tribute for his service. During the event a group of citizens paraded through the room chanting “I can’t Breathe,” the iconic last words of police chokehold victim Eric Garner. Video of this protest was aired on Fox News along with a scornful commentary by anchor Heather Nauert who called the spectacle “Unbelievable,” while an on-screen graphic condemned it as “Harassing a Hero.” On the Fox News community website Fox Nation, they posted the item with the headline “PATHETIC: Ferguson Protesters DISRUPT Ceremony Honoring 100-YEAR-OLD Veteran.”

It needs to be noted that the vet’s tribute was just a part of a public town hall meeting where citizens are permitted to gather and be heard on a variety of local concerns. It was not a dedicated ceremony for the vet. What’s more, Fox Nation got the story wrong with the “Ferguson Protesters” label when they were actually referring to the the Garner killing in New York. On the other hand, the funerals for officers Ramos and Liu were specifically planned to pay respects to two cops who were brutally murdered in an unprovoked ambush.

So according to Fox News, it is unthinkable for citizens to attend a public meeting and express themselves on a matter that directly impacts their lives. But it is perfectly fine to disrupt a funeral in order to complain about political differences with a city’s mayor. This is reminiscent of how Fox News would glorify, and even help promote, the protesters associated with the Tea Party, but condemned and slandered those connected to Occupy Wall Street.

On Fox News a protest BY police officers attacking a liberal mayor is reported as honorable. But a protest OF police officers by citizens is condemned as pathetic. So the legitimacy of any protest as reported by Fox News is dependent on whether the participants are aligned with the network’s biases. And while Fox often complains about big government and tyrannical politicians, they seem perfectly comfortable with advocating for a police state that cannot be criticized or held to account.

13 thoughts on “On Fox News: Protest BY Police is Honorable. Protest OF Police Is Pathetic”