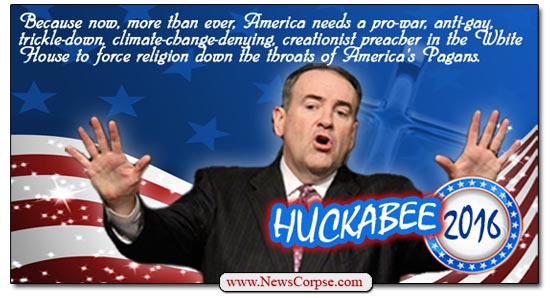 Huckabee’s path to the nomination would be blazed through the evangelical frontiers of the electorate and populated by social issues like marriage equality and reproductive freedom. As befitting a man of the cloth, Huckabee is devoted to faith-based governing and would echo Ronald Reagan’s famed inarticulate call to “Tear down that wall.” Except that he’d be talking about the wall between church and state.

Huckabee rejects evolution science in favor of creationism. He also regards Climate Change as a hoax and has hosted the Senate’s Pope of Denial, Jim Inhofe, on his Fox program. It is notable that while Huckabee now agrees with Inhofe, in 2007, before the Tea Party doctrinaires demanded total ideological compliance, he declared that “One thing that all of us have a responsibility to do is recognize that Climate Change is here, it’s real.” A few years later, and a stint on Fox News, and that responsibility, along with reality, has disappeared.

Perhaps the most foreboding thing about a Huckabee candidacy is his affinity for wild conspiracy theories that mirror those disseminated by Glenn Beck. News Corpse covered his certifiably deranged commentary in 2011 when he went full birther by stating as fact that President Obama had grown up in Kenya. Here is an excerpt from that article:

Huckabee: If you think about it, his perspective as growing up in Kenya with a Kenyan father and grandfather, their view of the Mau Mau Revolution in Kenya is very different than ours because he probably grew up hearing that the British were a bunch of imperialists who persecuted his grandfather.

Let’s stop for a moment and analyze this nonsense. First of all, there is ample evidence that Obama was born in Hawaii, including a birth certificate authenticated by the state. Secondly, there is no evidence to support the contention that Obama has any animosity toward the British. Thirdly, Obama’s father left the family when he was two years old, hardly enough time to influence him on foreign affairs, even if Huckabee’s assertions about Obama’s family were correct. Obama was subsequently raised by his mother and her parents who were from that mysterious, alien locale known as Kansas. So Huckabee’s thesis is riddled with holes and makes no sense whatsoever.

Where on earth would Huckabee get an idea like this? There’s really only one person who could manufacture such a fancy of dementia; only one mind so diseased: Glenn Beck. It was Glenn Beck who first popularized the notion that Obama hated the British because his grandfather (whom he did not know) had been imprisoned in England for his efforts to secure Kenya’s independence from the British crown. Gee, what other country did that? By Beck’s logic every American must also hate the Brits because they fought us in a brutal and deadly war of independence.

There is ample reason to oppose a Huckabee candidacy based solely on his extreme Christianist views. But when you add the sort of nonsense that fuels the fringiest wingnut outposts inhabited by the likes of Beck, Alex Jones, and the WorldNetDaily crowd, the only place for Huckabee in the political realm is on Pat Robertson’s 700 Club or as target of the Daily Show.