The ongoing contract negotiations between Fox News and the Dish TV network has resulted in Fox pulling their programming off the service until their demands are met. Consequently, Dish subscribers are reporting an unexpected rise in IQ and a corresponding decline in irrational fear. And it measurably improved their Christmas holiday. 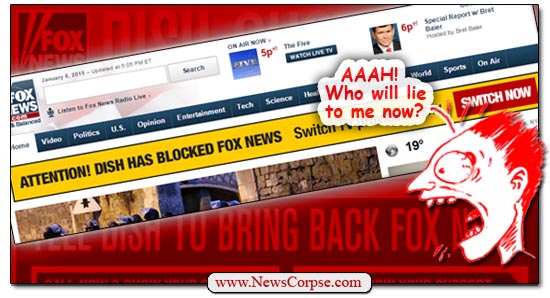 Over at the Fox News offices, however, it’s a different story. They are certain that the stalemate is befitting them and have been bragging to trade publications about their victories. A report in the industry publication Multichannel News quotes Tim Carry, Fox’s executive vice president of distribution for Fox News and Fox Business, estimating that Dish has shed 90,000 subscribers since the channels went dark. Carry attributes these alleged losses to subscribers’ inability to get their daily Fox fix.

You may be wondering now how Carry came up with the 90,000 figure, and after the explanation you will still be wondering. According to Multichannel News, Carry “based the total on the number of viewers that have reached out” via a website and toll-free number that Fox set up to organize their disgruntled fans. The article continues…

“Carry said that a combined 350,000 have called about or visited the section of the Fox website providing a list of alternative providers in the viewers’ area. He said the numbers began picking up on Dec. 26, after the Christmas holiday.

“Given ‘dwell times’ reaching four to five minutes, Carry said the programmer has extrapolated that at least 45,000 of these respondents have dropped Dish.

“He said those are not the only means for network viewers to express their disconnect displeasure and intention to move one, and projects that a like number have contacted Dish directly to drop the provider.”

So anyone who spent a few minutes on Fox’s Internet Home for Jonesing Wingnuts was counted as a disconnect for Dish, whether or not they ever subscribed to Dish. That would, by the way, include me and every other curious liberal who clicked on the bright yellow banner atop the Fox News website. And even at that, Carry was only able to muster 45,000 totally speculative disconnects. Obviously that wasn’t enough to register sufficient outrage. Carry’s solution was to arbitrarily double that made up figure with the explanation that an equal number of Fox withdrawal sufferers must have been calling Dish directly. Why did he double the amount? Who knows. Had he been more ambitious he could have said it was ten times more, since he wasn’t providing any factual evidence for the numbers anyway.

But what’s really funny about this desperate and lame attempt to spin subscriber stats is that all of the fabrications and distortions of math by Fox resulted in an insignificant reduction in Dish’s subscriber base. While 90,000 sounds like a lot, it actually represents a fraction of one percent of their total 14 million customers (0.64% to be exact).

Meanwhile, the ratings for Fox News have suffered a decline of significant proportions. Even taking into account the lower expected viewership during the holidays, some industry insiders regard the drop as statistically greater than what they might have experienced without the Dish dispute.

Fox may also want to consider that while their programming is blacked-out, Dish is poking them in the eye by replacing it with Glenn Beck’s TheBlaze, a glorified video blog run by a guy who is so deranged that Fox had to fire him (let that concept sink in).

Under the circumstances, it might be wise for Fox to capitulate and settle their differences with Dish. If they are having to contort themselves into this kind of wobbly PR without gaining any advantage, it speaks to the weakness of their negotiating position. However, it fits squarely with their skewed view of reality and suggests that they are just as determined to mislead themselves as they are to mislead their pitifully dimwitted audience. The blind deceiving the blind.