This morning there was a gruesome terrorist attack in Paris that took the lives of twelve people at the French satirical newspaper Charlie Hebdo. It was the sort of assault that generally stirs both outrage and an international commitment to unity in bringing the assailants to justice and preventing anything like it from occurring again.

For the most part that has been true. The governments of the world have expressed sympathy and solidarity for the victims and their families, the people of France, and journalists worldwide who are too often the targets of such violence. 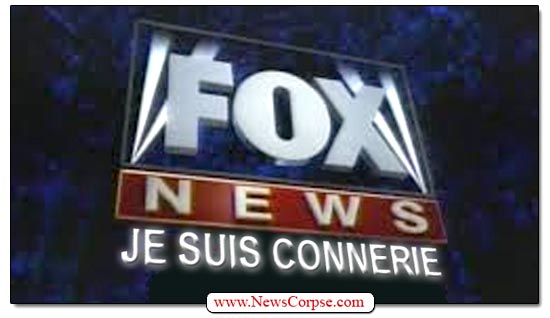 “I strongly condemn the horrific shooting at the offices of Charlie Hebdo magazine in Paris that has reportedly killed 12 people. Our thoughts and prayers are with the victims of this terrorist attack and the people of France at this difficult time.”

But leave it to Fox News to take this tragedy and politicize it in the most nauseating way possible. Before the blood stains on the floor have even dried, Fox News set out to grab political advantage by laying blame on the usual targets of their wrath. And, of course, it begins with attacks on Obama. Fox contributor Jonah Goldberg of National Review Online spent several minutes castigating Obama for his depiction of the attack, saying that it was not enough to call it terrorism, but it must also be labeled Islamic – even before there is any investigation that establishes whether that’s true.

And Goldberg was not alone in shifting the dialog from the attack and its victims to rank politics. Fox’s K.T. McFarland took the same path saying that “This is radical Muslim extremists […] Let’s take the political correctness away and call it what it is.” The abhorrent Ralph Peters (who has advocated for the rampant slaughter of civilians as a tactic in the war on terror) also demanded that the President specifically use the term “Islamist terror.” That was after he took a swipe at Sen. Diane Feinstein and the Senate’s report condemning the use of torture. Peters said that “These terrorists who did this monstrous attack in Paris are the people Sen. Feinstein doesn’t even want to waterboard.” Peters not only condones torture, but he has specifically called for military attacks against the media, which makes him an especially vulgar choice to interview after a tragedy like this.

Monica Crowley took up the political correctness theme in a segment with Fox’s Gretchen Carlson. Afterward, Carlson devoted the whole of her “My Take” commentary to criticizing Obama for not calling the Paris attack terrorism – which of course, is precisely what he called it. She ended by asking whether the United States will be the next victim of a terrorist attack. She must have forgotten that the U.S. was already a victim back in 2001, and that we have been on alert ever since. But there’s nothing like a little fear mongering to brighten up the Fox News morning.

Then there were the Kurvy Kouch Potatoes of Fox & Friends, who turned their bony fingers toward New York City Mayor Bill De Blasio. Elisabeth Hasselbeck said that “As soon as police act they’re painted with a racist brush, even by, in fact, our own mayor here.” What that had to do with anything is a complete mystery. But perhaps the worst offender was Fox’s military analyst Lt. Gen. Tom McInerney. He was prompted by co-host Brian Kilmeade to address some unattributed Tweets that alleged that in France “most cops choose not even to carry a gun.” Kilmeade added “That, thankfully, is not the case in New York.” to which McInerney responded…

“This is a classical radical Islamist attack. […] With the current leadership in New York — and I’m referring to the mayor, the communist mayor you have up there — that may change. […] The political correctness is killing us.”

For Chrissake! This imbecile is absolving the terrorists of responsibility for these attacks and assigning it to Mayor De Blasio and political correctness. What’s more, he holds the utterly delusional belief that De Blasio is planning to let NYPD officers choose whether or not to carry guns. Where does he get that idiot notion from? And finally, his incongruous and despicable insult that the mayor is a communist is the sort of stuff that is generally left to wingnut, conspiracy theorists like Alex Jones, Glenn Beck, and Sean Hannity.

The political correctness argument that Fox is so fond of is a thinly veiled desire for racist policies that accuse all Muslims of being terrorists. The insistence that acts of violent extremism be called, not just terrorism, but Islamic terrorism, is a demand that is rarely heard for any other act of violence. Why for instance, didn’t Fox News refer to the murder of Dr. George Tiller as Christian terrorism? And what about Eric Rudolph’s bombing of the Centennial Olympic Park? Or the bombings of Planned Parenthood offices? Or the murder of 77 children in Norway by radical Christian Anders Breivik? Or the Tea Party terrorists who murdered two police officers in Las Vegas? Or the entire history of the Ku Klux Klan and Christian Identity movements? [The SPLC has a more complete list here]

These are all examples of what could be called Christian terrorism if the Fox News model of journalism were applied fairly. But don’t hold your breath waiting for that to happen. For the radical partisans at Fox the only priority is how can this or any event be exploited to inflict political pain on their ideological enemies. They don’t care about the victims of terrorism or the safety of society or even justice. They only care about slandering the President and other Democrats in pursuit of their ultra right-wing agenda. And if that means twisting a tragedy into a partisan political screed, then that’s what they will do. It’s shameful and contrary to every code of ethics for journalism or common decency.