Anyone who doubts that the media has a powerful and influential impact on society and its forward progress is probably still trying to tune in radio broadcasts of The Lone Ranger. And part of recognizing that impact is paying attention to the ways that technology and evolving trends change how people interact with information.

The old guard is notoriously resistant to any disruption of their domain. So it is not surprising that staid, conventional media players are outraged and offended that President Obama has once again bucked their banalities to hobnob with more edgy communicators and reach out to a broader, more modern audience. 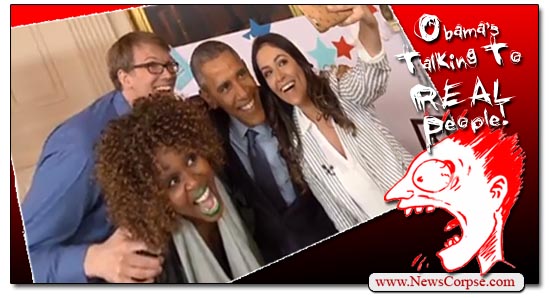 Obama’s White House interviews with three YouTube stars is emblematic of the shift in media access. The lucky video hosts may not have journalism credentials, but they do have a refreshing sincerity and massive audiences. In fact, they reach more people than would be reached by traditional media. Hank Green’s Vlogbrothers has a YouTube subscriber base of 2.4 million. The flamboyant Glozell draws 3.4 million. And Bethany Mota pulls in a whopping 8.1 million people. That’s about four times the viewers of Bill O’Reilly on Fox News.

Nevertheless, the dinosaur newsers have been fairly unanimous in their condemnation of the President for granting these interviews. Fox’s media analyst, Howard Kurtz, called it “beneath the dignity of the office to be hanging out with some of these YouTubers.” Glenn Beck called it “truly obscene” and compared it to going on a burlesque show. The folks at RightScoop called their fellow vloggers “a bunch of idiot YouTube stars.” And just about everybody focused solely on Glozell, the most outrageous of the three inquisitors, virtually ignoring the substance of the questions overall.

Ever mindful of protecting their turf, many in the press complained that Obama was dodging “serious” reporters by staging these Internet affairs. They must have forgotten that he just did a full court press conference last month. And the questions asked at that event were no better than those asked by the YouTubers. To the contrary, the YouTube questions were often far more substantive and relevant to the lives of real people. What’s more, the biggest issue that emerged from last months press availability seemed to be the right-wing indignation over the fact that all of the reporters called on were women.

Another logical failing on the part of conservative critics is that despite their relentless harping about how the “lamestream” media is a useless and outdated institution populated by elitist, partisan, know-nothings, they bust cranial blood vessels when the President steps outside the bubble to dialogue with an alternative to the mainstream. Apparently they will only be satisfied if he agrees to sit down with Ann Coulter or Rush Limbaugh.

Here is the White House video of all three YouTube interviews that has already been viewed more than 750,000 times.