Fox News has been proven repeatedly to be a purveyor of disinformation and outright lies presented as facts. Knowledgeable observers long ago ceased to take their reporting seriously. However, it’s one thing to be called out for shoddy journalism by experienced media analysts and news professionals. But when a high school class can demolish the highest rated cable “news” network with ease, the folks responsible should reconsider their career choices. 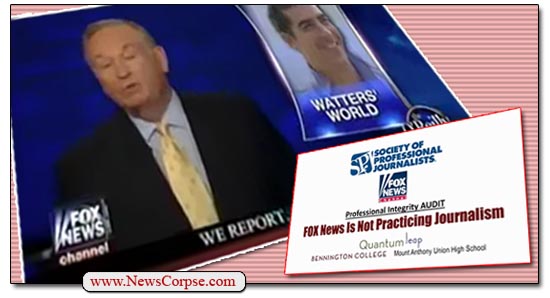 Last July O’Reilly sent his stalker/producer Jesse Watters to Bennington, Vermont in order to malign the residents of the city and the state as liberal, pot smoking, ski bums. It was a purely vicious exercise in childish insults that had no news value of any kind. But it is the sort of mean-spirited filler that Watters has made his specialty. Watters is also the founder and editor of Fox’s community website, Fox Nation, mangling the truth is the primary objective. [Note: don’t miss this epic and hilarious take down of Watters by Stephen Colbert]

The students at Mount Anthony Union High School in Bennington happened to be studying journalism when they came upon this piece. So they used it as a case study to conduct a “professional integrity audit” based on the ethics codes of the Society of Professional Journalists. What they discovered was that O’Reilly’s program violated the ethics codes so many times they lost count.

The video produced by the students systematically took apart the Watters segment revealing O’Reilly, Watters, and Fox News to be blatant propagandists with no regard for journalistic integrity. In one short segment they found examples of stereotyping, distortions, manipulation, questionable sourcing, and predetermining outcome.

The students presentation was not what you would call polished. But, hey, they are high school students. They have plenty of time to sharpen their camera skills. The main thing is that the construction of their reporting and their adherence to high standards still makes them more watchable than the arrogant, blow-dried, FoxBots who stare down their noses at decent folks in small Vermont towns.

The video closes with the students articulating their conclusions based on a thorough analysis of the O’Reilly segment as it holds up to ethical scrutiny. The verdict was not something that a reputable journalist would relish:

“Based on our studies about the field of journalism, we have determined that you’re not practicing journalism. You’re practicing rank propaganda.” […]

“By watching Fox News, we have learned buckets about journalism – what to do and, more importantly, what never to do. It is our hope that Fox News can learn the very same from watching us.”

You have to admire their youthful optimism. It is unlikely that Fox will ever acknowledge the complete lack of ethics in their reporting. That’s mainly because they don’t regard it as a flaw. It is deliberate and in keeping with their mission to advance a partisan political agenda, even when it is merely ridiculing innocent victims of their juvenile pranks.

Addendum: After reading some of the comments below, it is clear that right-wing trolls have descended on this article to attack young people for speaking their mind. What’s sad is that the conservative critics can’t even form coherent arguments to rebut the students on substance. They rely on insults and rhetorical misdirection.