Last week Mike Huckabee, prospective GOP presidential candidate and former Arkansas governor, pastor, and Fox News host, revealed his views about women during a radio interview. His remarks have stirred up a mess o’gritty squabbling about what appeared to be an insult directed at his former Fox News colleagues. 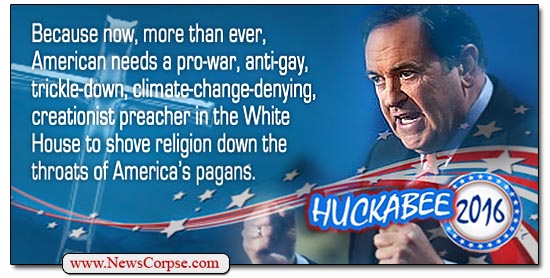 Huckabee was responding to a question about whether he went through any “culture shock” when he came to New York to do his program on Fox News. He answered saying…

“Absolutely a cultural shock. … I thought, man, this is a different planet. And I came more and more to realize that the cultural divide is significant. It’s one of those things where in a business meeting that you might have in the South or in the Midwest there in Iowa, you would not have people who would just throw the f-bomb and use gratuitous profanity in a professional setting.

“In New York, not only do the men do it, but the women do it. And you know, you are just looking around, saying, my gosh, this is worse than locker room talk. This would be considered totally inappropriate to say these things in front of a woman, and for a woman to say them in a professional setting, we would only assume that this is a very, as we would say in the South, that’s just trashy.”

Following the interview, Huckabee was criticized for apparently insulting the women at his former network. However, he hit back saying that…

“I never said anything derogatory about the people at Fox News. I talked about the overall coarseness of conversation and gratuitous profanity that I hear in places in what I call the bubble zoo like New York, Washington and Hollywood. But, clearly, the reporters who took those headlines and made those stories up made ‘em up out of thin air. It’s an outright lie.”

That denial was picked by conservative media who also accused liberals of making up the quote and posting what they said was the whole statement to prove their contention. However, they left out the question that Huckabee was asked which explicitly referenced Fox News:

“So you were a successful governor there, and you’ve been doing a very successful talk program on Fox News. That means you went from the frying pan to the fire.”

So it could very easily be interpreted that Huckabee was responding directly to the query about his move from Arkansas to Fox News in New York. It could also be interpreted as being meant more generally about what Huckabee calls “Bubbleville” (as opposed to “Bubbaville”). Therefore, it was certainly not made up and there is no justification for calling it a lie. In Huckabee’s defense, the best that he could say is that he answered a bit clumsily.

The big problem that no one is talking about is that if we take Huckabee at his word that he was not referring to the women at Fox News, than he is asserting that the insult was meant to apply to an even larger group of people who inhabit America’s big cities. Huckabee is, in effect, making a broad assertion that everyone – men and women – in New York, Chicago, Los Angeles, Washington, etc., are trashy. How is that better?

The truth is that Huckabee is continuing in the mold of Republicans who have an innate hostility toward women in general. He regards them as being a separate class of citizen that must behave differently than men to be considered respectable. And while he denies that he was referring to the women of Fox News directly, he is still insulting them because they are also women who live in New York. There is simply no getting around this for Huckabee. He was even called out by Fox’s Megyn Kelly who told him on behalf of the women at Fox that…

“I do have some news for you before I let you go. We are not only swearing. We’re drinking, we’re smoking, we’re having premarital sex, we have birth control before we go to work, and sometimes boss around a bunch of men.”

Kelly’s admission reveals that Huckabee was, in fact, lying when he said that he never heard the women at Fox use bad language. That is nothing new for him. He was recently embroiled in a controversy wherein he complained about Beyonce being a bad influence, but gave Ted Nugent a pass, and even performed with him on his show. Then, reacting to the hypocrisy, he said that Nugent had changed the lyrics for that performance, which the videotape shows to be a lie (Also, Huckabee has never complained about the constant stream of vulgarities from his pal, Nugent). On another occasion he went full-birther during a radio interview, but afterward gave an excuse that was likewise proven to be false.

For a former Christian minister who professes to want to lead a moral revival in his quest for the presidency, he has sorry record of adhering to the truth. After all, not lying is one of the Ten Commandments, and Huckabee can’t manage to abide by it.