Once again Glenn Beck has used his unique ability to see through the clandestine schemes being perpetrated by nefarious government conspirators. It’s a vision that only he possesses. And this time the plan he’s uncovered is so insidious that it exploits some of the most benign projects to beget national catastrophe. 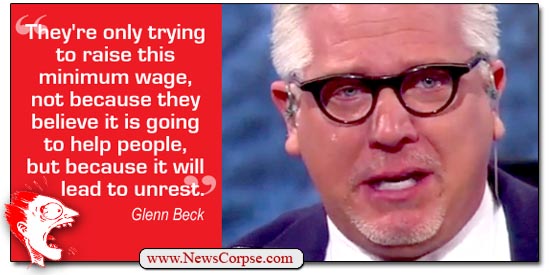 The devious design is one that Beck describes as “really dark” and is associated with historical figures like Woodrow Wilson and the nineteenth century European band of Fabian Socialists. On his Internt blog yesterday (video below), he reveals that Obama’s initiatives to raise the minimum wage and send more kids to college are really a backdoor tactic to produce civil unrest and revolution. Let’s let Beck explain it himself…

See? It’s so simple. Obama gets young people to seek higher education, which Beck and many conservatives regard as indoctrination into an evil cabal of intellectuals, and before you know it they are slaves to debt and ripe for radicalizing. Never mind that education is the pathway to full-time jobs that pay significantly more than minimum wage, and that the Obama administration has been fighting Republicans to ease the college debt problem by reducing interest rates on loans, offsetting tuition with public service, and making community colleges free. In Beck’s analysis better educated kids will only result in disaster. Beck continues…

“Then all of the unskilled labor force, the immigrant and everyone else, they come in. They can’t get part-time work because they’ve been priced out of it too because they don’t have skills, it’s not skilled labor.”

Exactly. And Beck’s proof for this is his ability to say it out loud. He offers no evidence that minimum wage increases have ever priced anyone out of the job market. In fact, it generally improves the prospects for employment that pays enough to bring workers closer to a living wage with which they can support themselves and their families. There have been plenty of minimum wage increases over the past several decades that show no harm to the economy or job availability. To the contrary, raising the minimum wage has proven to be a huge benefit. It pulls millions of American families out of poverty while injecting billions of dollars into the economy. But what only Beck is brave enough to tell us about it is that…

And certainly everyone recalls all of the bloody revolutions that ensued following the minimum wage increases of the past. The civil unrest engaged in by people who were better paid is a notorious stain on our history. Although that recollection may be clouded by the actual data that shows economic growth and job creation was more pronounced in states that did raise wages.

Don’t let facts lull you into a false sense of security. That’s a trap that is made all the more dangerous by the sort of higher education that Beck has already warned us about. Right-wingers like Beck are correct to be worried about education because the more of it that people have, the fewer people that will follow grifters like Beck and vote Republican.

The only thing that is necessary for you to remember, according to Beck et al, is that Hillary Clinton loves Saul Alinsky and President Obama belonged to the church of Rev. Jeremiah Wright. If you stay focused on important matters like that you will be shielded from the inconveniences of reality as you stock up on survival seeds and gold bullion.