It doesn’t take much to bring out the veneration for tyrants among the wingnut characters on Fox News. The conservative DNA is predisposed to favor authoritarianism. Last year it was Vladimir Putin who got them all hot and bothered, even to the point of wishing that the Russian dictator was the leader of the United States. 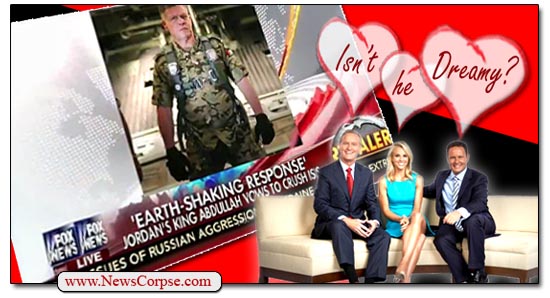 Now it is King Abdullah of Jordan who warms their cockles. During a segment of Fox & Friends (video below), the Kurvy Kouch Potatoes let their emotions spew forth about the Jordanian he-man who they were fooled into believing had personally stormed into battle against ISIL. The news that King Abdullah piloted air strikes in Syria was never authenticated, but that didn’t stop Fox from trumpeting the bravery and conviction of the monarch. Steve Doocy led off with the undeserved praise, followed quickly by an overheated Elisabeth Hasselbeck:

Doocy: Now this morning there is news that the King, who is also a trained pilot, the Jordanian media is reporting that there is a possibility that the King could have taken part in some of the air strikes.
Hasselbeck: He is stepping up with strong leadership and clarity. So what is our president doing?

First of all, a Jordanian spokesman made it clear that the King did not participate in the air strikes. What’s more, they said that it was incorrect to suggest that he is or ever was a fighter pilot. So virtually everything that Doocy said was wrong. That’s a state of affairs with which he should be quite familiar by now.

Secondly, the slap that Hasselbeck took at the American president was evidence of both her ignorance and her utter disrespect for America and its leadership, as well as her adulation of foreign dictators. The argument that Jordan has done more to fight ISIL is rooted in open disdain for President Obama.

The truth is that Jordan executed a couple of prisoners who were already sentenced to death, and then flew some missions to bomb terrorist fighters in the field. Obama has been doing that for months. His campaign against ISIL has already resulted in over 6,000 terrorist casualties, including more than half of their top commanders.

And yet, the Fox News crew thinks that Obama should be more like King Abdullah. For Obama to do that he would need to scale back his current efforts considerably and only step forward when some tragedy occurs. For the record, the U.S. score vs. ISIL is about 6,000 to 3.

Let’s face it – Nobody at Fox is going to give this President credit for anything, even when the facts show that he is by far outperforming the international community’s response to global terror. Their only goal is to belittle the President, and by extension, America, in order to advance their bitterly partisan and purely political agenda. How exactly do they think that it helps our nation when they insult our Commander-in-Chief and accuse him of being weak? It’s a veritable invitation to the enemy to escalate their attacks. And that is how patriotism is practiced by the right-wing zealots who run and watch Fox News.