During the State of the Union address last month, President Obama made note of a particularly perilous situation that requires an immediate response in order to prevent certain catastrophe. Warning that “no challenge poses a greater threat to future generations than Climate Change,” Obama said that…

“The best scientists in the world are all telling us that our activities are changing the climate, and if we don’t act forcefully, we’ll continue to see rising oceans, longer, hotter heat waves, dangerous droughts and floods, and massive disruptions that can trigger greater migration and conflict and hunger around the globe. The Pentagon says that Climate Change poses immediate risks to our national security. We should act like it.”

Those remarks stirred up a bit of the usual knee-jerk opposition from wingnut science-deniers at the time, but they failed to endure through subsequent news cycles that shifted gears to more critical matters like the American Sniper movie, the end of Mitt Romney’s presidential aspirations, and measles. But the anti-science crowd was not to be ignored. So they are now ratcheting up the hoax-talk in order to reclaim the nation’s attention.

Not surprisingly, it is Fox News pushing the issue back into the slimelight by posting an article on their community website, Fox Nation, about the administration making Climate Change a national security priority. While there is nothing in the article itself (from the Huffington Post) that is especially newsworthy, the Fox Nationalists purpose is to trumpet a headline that they know will stimulate their dimwitted readers. After all, what could be more horrifying than Obama giving Climate Change the attention it actually deserves? 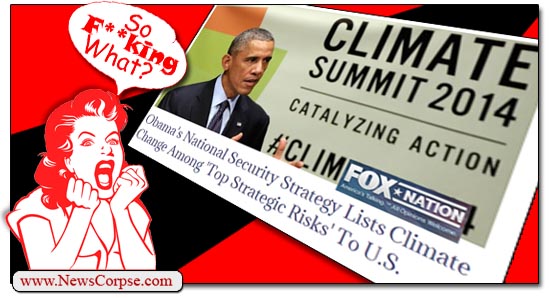 Shortly after this national security policy was released, Obama was interviewed by Matthew Yglesias of Vox Media. He told Vox that the media is responsible for over-hyping terrorism to the detriment of other threats that impact more people. That comment was later seized upon by Jonathan Karl of ABC News (and the rest of the Right-wing Media Circus) who asked Obama’s press secretary, Josh Earnest, if the President actually meant to say that “the threat of climate change is greater than the threat of terrorism?”

Why is this such a difficult concept for conservative pundits and politicians? Climate Change is a global phenomenon that has the capacity to cause devastating environmental trauma impacting the entire population of the planet. In the United States alone there are already regions that are suffering more severe natural disasters like hurricanes and drought. And around the globe these problems, along with multiplying refugee populations and temperature extremes, are both costly and deadly. It could not be more obvious that the billions of potential victims of Climate Change make it a greater threat than terrorism. Note: To date ISIL has killed four Americans.

More to the point, the current debate revolves around the threat that Climate Change poses to national security. On that level the military has been crystal clear for years about the very real consequences of a world where water and arable land become scarce, and nations erupt into chaos and war.

The Rolling Stone just published an extensive examination of The Pentagon & Climate Change: How Deniers Put National Security at Risk. Among its many documented examples of a very real threat certified by numerous military experts is one that ought to be persuasive to the conservative Republican deniers:

Nevertheless, Fox News is still trying to raise a ruckus about Obama properly prioritizing Climate Change as a serious concern for national security, just as the Pentagon has done for years. What’s plain is that Fox could not care less about the welfare of the nation. They are solely devoted to disparaging this president and any policy with which he comes into contact. And they will pursue that mission despite the absence of reason or ideological consistency.

6 thoughts on “Fox News Fail: Comparing The Threat Of Climate Change To Terrorism”