Speaking at the Catholic-Evangelical Leadership Summit on Overcoming Poverty at Georgetown University (video below), President Obama made an astute observation about one of the causes of persistent negative impressions of America’s underprivileged class. He noted that some elements in the media are deliberately disparaging poor people as “sponges, leeches, don’t want to work, are lazy, are undeserving” and that, as a result, those false caricatures gain traction. Except that he was a bit more specific about the guilty media.

“If you watch Fox News on a regular basis, it is a constant menu, they will find folks who make ME mad. I don’t know where they find them. They’re all like ‘I don’t wanna work. I just want a free Obamaphone.’ And that becomes an entire narrative that gets worked up. And very rarely do you hear an interview of a waitress, which is much more typical, who’s raising a couple of kids, and is doing everything right, but still can’t pay the bills.” 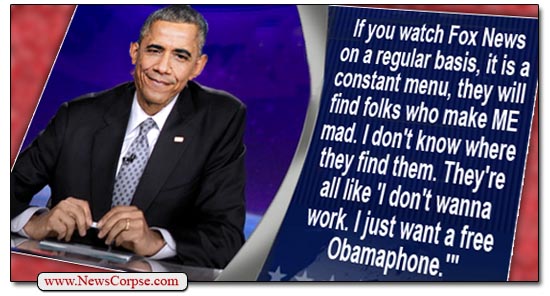 Obama could have gone much further and blasted Fox News for lying about the entire spectrum of progressive politics from trickle-down economics, to healthcare, to Climate Change, etc. But as this was a summit on poverty, the President kept a narrow focus on how Fox News stigmatizes the poor. His larger point was that by disseminating ugly stereotypes the media makes it more difficult for legislators to address real problems because their constituents have been infected with false impressions of the recipients of aid.

It was a brilliant stroke to include the absurd “Obamaphone” meme that right-wingers latched unto as another fake atrocity that they could attribute to the president they are convinced is a gay Muslim from Kenya. However, Obama may have given his critics an opening to rant feverishly when he said that “We’re going to have to change how the media reports on these issues.” Glenn Beck and his ilk will interpret that as a tyrannical dictate to control the press, rather just the desire for the media to be honest, fair, and avoid demonizing a sector of society that is already suffering.

One thing we can rely on is that Fox News will throw a tantrum over these comments by Obama, as they always do when he correctly calls them out. Fox is all for free speech as long as it doesn’t contain any criticism of their blatantly dishonest propaganda.

Update I: Well, that didn’t take long. Neil Cavuto on Fox News is already bitching about Obama calling them out. My money is on Eric Bolling to be next. For a network that calls itself “The most powerful name in news” they sure whine a lot.

Update II: Joining Cavuto so far have been chief Fox News anchor Bret Baier, Todd Starnes, James Rosen, Martha MacCallum, and Fox Business Network anchor Stuart Varney, who denied that Fox ever called welfare recipients lazy, then went on to defend the Obamaphone myth. Then there was Megyn Kelly, whose blisteringly dumb remarks alleged that Obama took “a swipe a Fox News today for showcasing low income folks who are gaming the system on his watch.” No, actually, that is not what he did. In fact he took a swipe at Fox News for slandering low income folks who are playing by the rules to provide for themselves and their families. Kelly just proved Obama’s criticism was correct as she continues to slander decent, hard-working Americans.