Politico is reporting that Fox News has declined to renew Sarah Palin’s contract which expired June 1. This development might have been predicted based on Palin’s recent history of appearances (or lack thereof) on the network. In fact, News Corpse did predict it back on June 3, in an article titled “Missing From Fox News: The Incredible Disappearing Sarah Palin,” that revealed her mysterious absence from her cable news home. 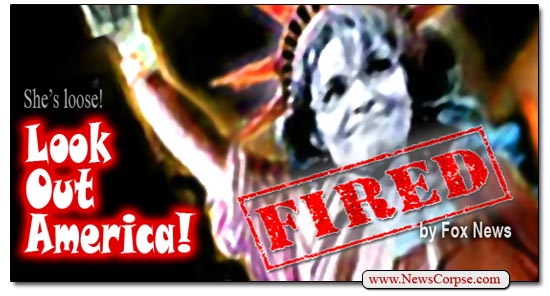 “More ominous from the perspective of Palin, and those who need a regular fix of her unique brand of incoherence, she has been absent from her duties as a Fox News contributor. The last appearance on the network seems to have been in January on Sean Hannity’s program. That booking four months ago was clearly arranged as an attempt to recover from a speech she gave at Wingnut Steve King’s Iowa Freedom Summit, where she so embarrassed herself that even fellow conservatives were turning their heads in shame.” […]

“Palin’s demeanor was so unpleasant that it would be understandable if Hannity and other Fox News hosts are now reluctant to invite her back. Or maybe she’s busy with her web video channel. Nah, that can’t be it. She only posted nine videos the whole month of May for a total of 20 minutes of programming. A more likely scenario is that a Fox honcho (i.e. CEO Roger Ailes) has decided that Palin is now a liability as the 2016 campaign season heats up and they don’t want her around screwing up their plans to send a Republican to the White House.”

So the paucity of Palin’s bookings was no accident. She was unceremoniously dumped without a farewell or a tribute or even a press release offering best wishes for what ever she does to make a laughing stock of herself in the future. This should leave her more time to focus on her neglected web video channel. Or maybe not. Since her dismissal from Fox she has spent even less time there, having posted only five videos in June so far, for a total of less than seven minutes. And yet she still makes her glassy-eyed disciples pay the full $9.95 a month for her lame video selfies and stream of unconsciousness meanderings.

Palin’s last appearance on Fox seems to have been on June 8, where she defended the repulsive Duggar family. It was a typically dimwitted tirade of the sort that may have been the inspiration for her now ex-boss Roger Ailes calling her an idiot. Although there is no shortage of reasons to hold that opinion, including Palin’s campaign to impeach President Obama for both solving and not solving the debt crisis, or her infamous and mythical death panels.

No wonder Ailes had fired her once before. It was back in January of 2013, when the story was that Fox offered a low-ball contract renewal that she was certain to reject. Six months later they made up and Palin was back on Fox. The reasons for the reconciliation run from Ailes’ admission that he rehired her to “piss off the people that wanted her dead,” to the reality that her finances took a nosedive after she departed from her Fox News perch.

So what’s next for the Quitta from Wasilla? She still has her low-rated travelogue on the Sportsman Channel. She still has her Facebook page. And she still has an abundance of fans too stupid to grasp what the rest of America has already realized: That Palin is a grifter who has never had an original thought or an ambition that didn’t involve enriching herself. It is always comedians who are first to suffer when a cartoon character like Palin leaves the stage. But this couldn’t have happened at a better time, since Donald Trump just announced that he is running for the Republican nomination for president of the United States. Hallelujah.