America’s own rogue GOPachyderm, Sarah Palin, is such a consistent source of hilarity it seems impossible that she could keep up the pace any longer. But just when you think she’s exhausted her supply of inanity, she posts another Facebook column and reestablishes her crackpot bona fides:

What Palin is mocking as “laughably absurd” is known to those who have advanced beyond remedial economics as “the truth.” The point of raising the debt ceiling, which Palin goes out of her way to misunderstand, is to pay for debt already incurred. It does not, and cannot, authorize new spending. Only Congress can do that. So if Palin has a problem with the outstanding debt, she needs to take it up with John Boehner.

Palin continues by declaring that “It’s also shameful to see [Obama] scaremongering the markets with his talk of default.” I wonder if she would castigate the sainted Tea Party icon, Ronald Reagan, for saying (video here)…

“Congress consistently brings the Government to the edge of default before facing its responsibility. This brinkmanship threatens the holders of government bonds and those who rely on Social Security and veterans benefits. Interest rates would skyrocket, instability would occur in financial markets, and the Federal deficit would soar.”

But Palin hasn’t even begun to showcase her Olympian idiocy. Her Facebook drivel proceeds with a self-contradictory passage that begins by stating that…

“There is no way we can default if we follow the Constitution. The Fourteenth Amendment, Section 4, requires that we service our debt first.”

Actually, what the Fourteenth Amendment (Section 4) says is that “The validity of the public debt of the United States […] shall not be questioned.” It is a controversial clause that many interpret as authorization for the President to unilaterally raise the debt ceiling at will. So it appears that Palin is advising the President to take matters into his own hands. But her next paragraph puts an end to that sort of thinking.

Huh? Palin just got finished arguing that the Constitution demands that the President take any and all measures to pay our debts. Now she says that if he does so he is guilty of an impeachable offense. And just to lock in the crazy, she also says that not doing so is likewise impeachable. In Palin’s twisted reality Obama cannot glance sideways without violating his oath of office.

What is abundantly clear is that Palin wants to believe that whatever this President does is a justification for impeachment. Her perspective is so irreparably warped that it has lost any semblance of rationality. This is something that has been noticeable for quite some time with Palin, but what stands out as utterly incomprehensible is that there are still people who hang on her every word – including in the media. It’s a sad state of affairs, but one that is not irreversible. We just need to provide the proper educational support. So let’s start with something that Palin might be able to grasp. 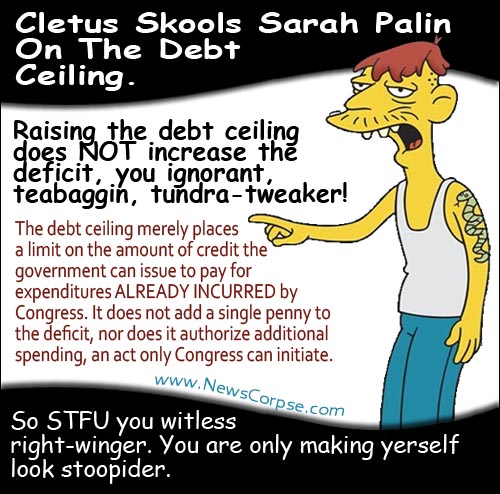