When Hillary Clinton was running away with the Democratic nomination, it was not unusual to hear Fox News pundits pumping up Bernie Sanders. It wasn’t because they admired his progressive policies or his grassroots appeal. It was because they reflexively jumped at any opportunity to knock Clinton down a peg.

Now that the Sanders campaign is actually looking competitive, the same Foxies are getting nervous and looking for ways to discredit him. The primary line of attack has been to feverishly repeat that Sanders is a (gasp) Socialist. Under ordinary circumstances that would be sufficient to rattle the fear centers of their perpetually anxious viewers. 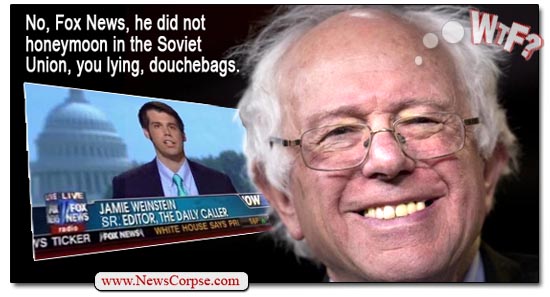 However, these are not ordinary times. Consequently, more creative measures were required by the Fox punditocracy. So they brought in Jamie Weinstein, senior editor of Tucker Carlson’s ultra-rightist Daily Caller, to slip a brazen lie into the discussion at the very end when there was no time left for it to be rebutted. The segment sought to concern-troll Clinton’s less commanding, but still substantial, lead over Sanders, while simultaneously dismissing the surging challenger as a far-left crank.

Where the broadcast went off the rails was at the end when Weinstein concluded his final diatribe by making an assertion that was utterly false and intended to defame Sanders. He offered as evidence of Sanders supposed extremism that he had spent his honeymoon in the Soviet Union. That allegation is almost laughable, but it will assuredly be swallowed whole by Fox’s dimwitted viewers. Following Weinstein’s false comment, Fox News anchor Gregg Jarrett smiled and noted that you learn something new every day. The problem is that, with Fox News, what you learn each day just makes you more stupid than you were the day before.

The origin of the this made-for-Fox fallacy was a 2007 interview of Sanders’ wife, Jane, by Vermont Businesses for Social Responsibility. In the interview she was describing how she and Bernie met and some of their early engagements which were almost entirely related to their shared interest in community affairs. They were so involved in these sort of activities that she joked…

“The day after we got married, we marched in a Memorial Day Parade, and then we took off in a plane to start the sister city project with Yaroslovl with 10 other people on my honeymoon.”

The context was obviously humorous. Who could possibly read that and come away thinking that she seriously meant that they honeymooned with ten other people who were implementing a sister city project? Well, apparently Weinstein and others of his ilk came away believing just that. Weinstein likely picked up the lie from uber-conservative John Fund who wrote an article for the National Review containing the same misrepresentation of Sanders’ diplomatic trip.

We are going to have to get used to wingnuts hyperventilating over the political labels attached to Sanders. Today there was an extended discussion on Fox’s The Five about “Sanders’ Socialist Agenda.” At no time during the broadcast did anyone on the show identify any policy advocated by Sanders that they could actually call Socialist (if they really have any idea what the word means). The policies they did mention were his support for higher taxes on the rich, for expanding access to education, and for single-payer healthcare. Those are pretty mainstream policies that millions of Americans support. And the right has been absurdly calling Obama a Socialist for so long that the word has lost all meaning.

There was also much feigned hand-wringing about whether Sanders was going to pull Clinton farther to the left and damage her electability in the general election. The consensus on the program was that she was already a far-left candidate without Sanders’ influence. But these cretins think that just being a Democrat means being far-left. What they don’t realize is that Sanders’ platform leans to the mainstream of the American people who elected President Obama twice. Any effect he has on Clinton moving in that direction will only enhance her electability. So bring it on, and don’t complain if the people once again reject the regressive and repressive policies of the Republican Party in November of 2016.

56 thoughts on “No, Fox News, Bernie Sanders Did Not Honeymoon In The Soviet Union”