To nobody’s surprise, the wheels are continuing to fly off the bus that has been carrying Sarah Palin around the country to the posh hotels paid for by oil companies inviting her to deliver her famous word-salad soliloquies. 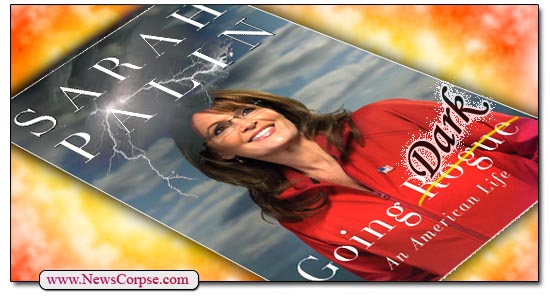 The latest bad news from Sarahville is that her much vaunted Internet video channel is shutting down. Palin made the announcement in a video (posted below) that beginning August first, all her content will be free and available on her Facebook page and her SarahPAC website. This must be a big disappointment to her devoted fans that paid a hundred bucks for an annual subscription, especially considering that the service barely lasted a year. Her bizarrely cheerful swan song said in part…

“Hey, I wanna thank you from the bottom of my heart for your support, and to let you know personally that we’re making all of my content free now. […] I just want to make sure that your voices and mine are heard by the widest possible audience across this great land of ours.”

If she actually had any support she wouldn’t be ending the project. The writing was on the wall long before Palin posted her farewell. As documented here at News Corpse, she had already been neglecting the venture in terms of providing content. Palin had been AWOL for twenty days in the first two months of this year. Again in June she posted only six videos the whole month for less than nine minutes of her inspirational presence. That kinda leaves you wondering exactly what she means when she says that from now on all of her content will be free. What content? [FYI: As of this writing her channel is still available for people to sign up for subscriptions even though it isn’t continuing beyond this month]

So why did Palin decide to be so generous as to give away the paltry collection of video selfies for which she has been making people pay for the last year? One likely reason is that it wasn’t making any money, so it is no sacrifice to forego the subscription fees. But even more likely is that Palin desperately needs exposure now that she and Fox News have parted ways. It is no coincidence that this move comes less than two weeks after the announcement that Fox would not renew her contract. The first time that Palin was fired by Fox, in 2013, it was quickly discovered that the loss of a national TV platform was costly for her. As documented at the time…

“The Center for Public Integrity reports that Palin’s PAC has brought in less than half of her take by this time in 2012, and less than a third of 2011’s first half earnings. The difference is that in both of the prior years she still had her perch at Fox News. The first six months of this year Palin was nearly invisible. Consequently, her ability to con gullible Tea Party rubes out of their meager funds was greatly diminished.”

Palin is in danger of disappearing from public view entirely. Without Fox she has only Facebook, Twitter, and a low-rated travelogue on the Sportsman Channel to promote herself, her ghostwritten books, and her personal, non-profit slush funds. There is no comparable replacement for Fox News for someone like Palin who is painfully shallow, ill-informed, and inarticulate. She simply is not qualified for a job with the news divisions of ABC or CNN, or even more entertainment oriented vehicles like The View. She could write op-eds for WorldNetDaily or Breitbart (which she has already done), but they don’t have nearly the audience that Fox has.

While things look bad now for the Mama Grizzly, all is not necessarily lost. There is still a market out there for her inane babbling. She could team up with Ted Nugent for a moose hunt/barbecue vacation adventure. She could license her name to the Koch brothers for a line of Palin Oils (suntan, cooking, snake, etc.). Then again, she could always star in a new reality show like “The Desperate Housewives of Wasilla.” So stay positive, Sarah. As they say, “There’s a sucker born every minute.” You just need enough minutes to cover your lavish expense account.