The ferocity with which Fox News is chasing the story about Hillary Clinton’s email is becoming a pathetic tale of desperation and jealousy. It’s not enough that they report wild speculation as fact, they are determined to shape their coverage into what they regard as the Valhalla of scandals: Watergate. 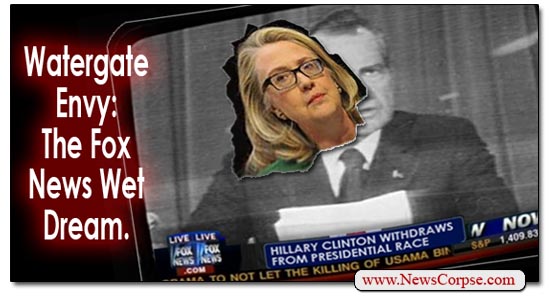 For the record, the Watergate affair involved blatantly criminal activity like burglary, political corruption, bribery, obstruction of justice, and presidential abuse of power. It began as a plot by the Nixon White House to steal private documents from the Democratic Party in order to secure his reelection by fraud. Then it evolved into a cover-up that included threats, deception, and million dollar payoffs.

The attempt to analogize Watergate to Clinton’s use of personal email accounts on a private computer server stretch the boundaries of absurdity. Even if the allegations that there were classified documents involved were true (and there is no evidence of that at this time), there is absolutely no suggestion, by even her harshest critics, that she was motivated by any larcenous effort to advance her own interests financially or politically. In other words, there was no intent to commit a crime.

However, to hear Fox News tell it, Clinton’s email controversy is identical to the felonies committed by Nixon’s thugs, many of whom went to prison for their crimes. Today Fox News contributor Meghan McCain (John’s daughter) wondered if “this could be this generation’s Watergate.” Yesterday Fox’s Special Report aired an entire segment devoted to baseless conjecture about Watergate. Also yesterday, Fox’s judicial analyst Andrew Napolitano tried to compare Clinton’s use of personal emails to Nixon’s habit of secretly recording everything that took place in the Oval Office. He never really got around to explaining what was similar about it. It was enough, for Fox’s purposes, just to plant the slanderous suggestion. Fox contributor John Bolton also weighed in to imply some conspiratorial connection between Clinton’s current email flak and her service on the Democratic Senate staff that investigated Nixon.

There was much more of this Watergating going on at Fox on other programs as they went all out to align Clinton with what is perhaps the worst political scandal in American history. But Watergate belongs to the Republicans no matter how much they whine about it. And whine they do. Before the Clinton campaign launched it was a regular obsession with Fox to compare anything associated with President Obama to Watergate. From Benghazi, to the IRS, to Libya, to Fast and Furious, and even to UFOs, Fox saw everything through their Watergate filter. [See News Corpse’s Illustrated Guide To The Fox News Obsession With Watergate]

Now they want to transfer their shame to Democrats so badly that they have lost all rational comprehension of what Watergate even entailed. Their accusations just seem anguished and impotent. But don’t let that make you think they will abandon their fetish for projecting Watergate’s stigma on Clinton or other Democrats. They are fully committed to their rewriting of history and they know that their dimwitted audience will eat it up.

7 thoughts on “Watergate Envy: Fox News Desperately Lusts For A Clinton Scandal They Can’t Have”