There is an unshakably nauseating streak of hatred that permeates Donald Trump and the Republican Party. It seems that every day more proof of it is provided without hesitation or shame. The latest examples were included in Trump’s remarks yesterday in New Hampshire and began with his insistence on using a term that is widely known to be an offensive epithet.

Tom Llamas of ABC News asked Trump about his use of the term “anchor babies.” The term refers to the alleged practice of immigrants entering the U.S. illegally in order to give birth to children who could then sponsor the parents for legal residency and citizenship. However, it is an entirely bogus notion because a citizen has to be twenty-one before they can sponsor a family member. So for this scheme to work the parents would have to wait twenty-one years for the child to grow up and then another ten years as punishment for having entered the country illegally to have the baby. That means it would take thirty-one years for the parents to be eligible for residency and another five years after that before they could apply for citizenship.

Nevertheless, Trump not only used the term, but stood by it defiantly when told of its derogatory meaning.

Llamas: Are you aware that the term ‘anchor baby,’ that’s an offensive term?
Trump: Excuse me! I’ll use the word anchor baby!

This isn’t any different than being told that the phrase “tar baby” or the “N” word is derogatory but ignoring the warning and using it anyway. The larger point that Trump was making was to affirm his opposition to birthright citizenship, a 150 year old provision of the Constitution (14th Amendment) that Trump thinks won’t hold up in court. And following his ignorant and racist comments, at least four of his GOP colleagues (Jeb Bush, Ben Carson, Bobby Jindal, and Ted Cruz) joined in the immigrant bashing fully agreeing with Trump’s position.

Making matters worse, a couple of brothers in Boston were arrested for assaulting a homeless Latino man. When questioned by the police about their motives they said that “Trump inspired them.” 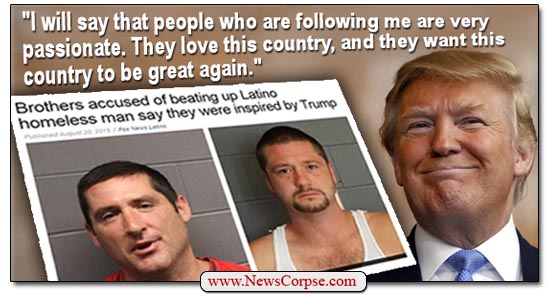 This is a predictable result of the kind of hostile rhetoric that Trump and other right-wing haters use. Under ordinary circumstances it might not be fair to hold Trump accountable for this violence, even though it is something he could have anticipated because it has happened before. What makes Trump liable in this case is his reaction upon learning of the incident. As reported by the Associated Press (and posted on Fox News Latino, but not Fox News), Trump said that it would be a shame and added…

“I will say that people who are following me are very passionate. They love this country, and they want this country to be great again.”

WTF? So Trump regards the thugs who viciously assaulted an innocent Latino man as passionate patriots who love their country. And for all he knows the victim was actually a citizen, In Trump’s view they were just trying to “make America great again.” And he must know that giving that kind of praise and public tribute to violent racists can only encourage more of the same.

This is worse than any of the idiotic statements Trump has made yet. It is deliberately inciting bigots to engage in violence. And it tells us exactly what Trump means by “great” when regurgitating his campaign slogan. Furthermore, it tells us what his party and his GOP rivals think when they fail to repudiate these remarks. And mostly it tells us what Fox News and Republican voters believe, because they are the ones propping up the Trump candidacy and its open embrace of savagery and prejudice. That’s something they have to own even after Trump’s campaign inevitably crashes and burns.