Ever since John McCain and Fox News burdened America with the addle-brained Mistress of the North, Sarah Palin, she has managed to unveil new ways of embarrassing herself and the country. In particular, she ranted about non-existent “death panels,” she accused President Obama of “palling around with terrorists,” and she affiliates with some rather conspicuously deviant characters like Ted Nugent. And now, in an op-ed for the far-right website Brietbart News, Palin has revealed her deep affection for a politician from France’s Front National, a party rooted in antisemitism and neo-fascism. 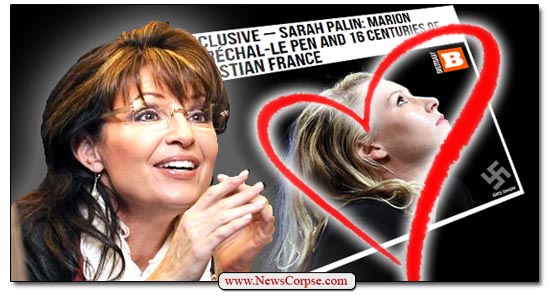 The article is a love letter to the modern Nazis of the French fringe who mirror Palin’s Tea Party politics of nativist, xenophobic, fear mongering and radical Christianist theocracy. She opens saying that…

“I have a political crush, but one I couldn’t vote for today – because she ran for office in France. Marion Maréchal-Le Pen is the new deserved ‘It Girl’ of French politics and a clear voice of courage and common sense in a country and continent in need of both.”

Obviously Palin relates to Maréchal-Le Pen due to her own tenure as an “It-Girl” in the early days of the McCain campaign before people heard her speak. And the love she has for this repugnant pol tells us that she is still as ignorant about the world as ever. Maréchal-Le Pen’s “courage and common sense” was soundly rejected by French voters yesterday as both she and her equally abhorrent aunt, Marine Le Pen, lost their bids for regional elective offices. Even in the wake of the tragic attacks last month in Paris, the French people could not abide the hateful politics of the Le Pen family.

“The Left wraps itself in political correctness and multiculturalism like a suicide vest. They’d rather blow up the whole country than admit the stupidity of thinking a nation can remain the same after inviting in millions of people who despise its values.”

Setting aside the offensive comparison of liberals, who are devoted to the principles of American freedom, to terrorists in suicide vests, Palin’s rhetoric asserts that there are millions of people who hate America that are being invited in. She doesn’t say who these people are, where they’re from or why they hate the country. The only plausible rendering of her word salad is that she is referring to Syrian refugees, of whom there will only be about 10,000, mainly consisting of families desperate to escape the terrorists who have overrun their homes.

Indeed, the similarities could not be more obvious. Trump and Cruz represent the fascist wing of America’s Republican Party. They all hold the same views about kicking out all of the foreigners to whom they object. They all support carpet bombing of countries where some of our enemies reside, without regard for the innocent civilians that would be murdered as a result of that tactic, which has been designated a war crime. And they all believe that Christianity should be the basis of Western civilization and its governments.

When you take those positions and combine them with the conservative politics that elevate corporations over people, you wind up with the brand of fascism that Mussolini once said would be better called corporatism. And for Palin to point out that the Le Pen family and the GOP are ideological twins is actually a helpful contribution to the political dialog, although not in any way that she would understand.