For weeks Fox News heavily promoted their New Year’s Eve special that would feature an appearance by Donald Trump to ring in the new year. This programming strategy is another affirmation that Fox is not even pretending to be fair and balanced anymore. But the real problem for Fox was that the segment was complete dud as both entertainment and advocacy. 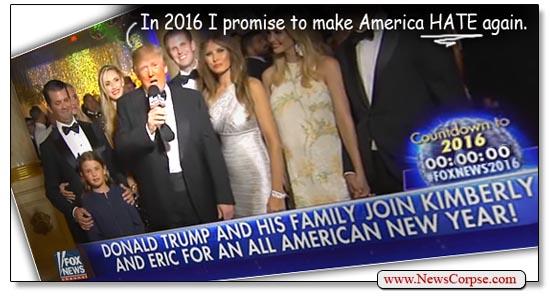 The hosts, Eric Bolling and Kimberely Guilfoyle, could not have been more annoying and obsequious. And The Donald was barely coherent. Combine that with technical glitches and missed cues and you have a evening of humiliation and unintentional comedy as exemplified in this exchange:

Bolling: The big question is, Donald Trump, New Year’s resolution 2016, campaign related, what are you gonna go for next year?
Trump: Well, we’re gonna have a great time next year. We’re gonna have an amazing year. We’re gonna make America great again. And we’re gonna do everything in our power to make sure that happens.
Guilfoyle: I see my friends there, Donny and Vanessea. It’s great to see the whole family and Ivanka. And Melania looking so gorgeous. I gotta tell ya, she would make an amazing First Lady of America.

Presumably he means mistakes like ending two wars, making health care accessible to millions, cutting the deficit by two-thirds, and bringing the economy back from the worst catastrophe since the Great Depression. But what these nitwits failed to realize is that on New Year’s day in 2017 President Obama will still be the president and residing in the White House. It may seem like a small point, but it is emblematic of the inbred ignorance of the Fox News yakkers and their buffonish guest, Donald Trump.

This inane chatter went on for nine minutes and served as little more than an infomercial for Trump. No other candidate was given this prime broadcast time as the calendar flipped a page. And he was in full campaign-mode, asserting that he would be Hillary Clinton’s “worst nightmare” and repeating his campaign branding and slogans ad nauseum. Given another chance to come up with a New Year’s resolution he again said only that he would “make America great again,” to which Guilfoyle’s trained puppy response was “Good choice.” I’m really starting to wonder when Trump will turn his slogan into a jingle and have a tie-in with Pepsi or McDonalds (McDonald Trump? I’m lovin’ it).

To top it off, Bolling and Guilfoyle let the Trump family ramble on for so long that they actually missed the New Year’s countdown. The right side of the screen showed the clock tick to zero while the Trump’s were still hogging the slimelight. Then, to cover their fumbling of the most important part of the evening, they initiated their own fake countdown after the new year had already begun. Seriously, these cretins had just one thing to do right on this broadcast, which was the countdown to the new year and they blew it in order to cater to Donald Trump’s lust for attention. Watch and laugh – and have a happy new year.