Ever since the Fox News Republican primary debate there has been an openly acrimonious brawl between Donald Trump and Fox News. The notoriously thinned-skinned whiny-baby Trump was offended that debate co-moderator Megyn Kelly had the audacity to ask him about some things he actually said that were denigrating to women. Subsequently he publicly attacked Kelly saying that she was “overrated” and a “lightweight.” These juvenile insults were later escalated with Trump alluding to Kelly’s menstrual cycle saying that “there was blood coming out of her eyes, or blood coming out of her wherever.” 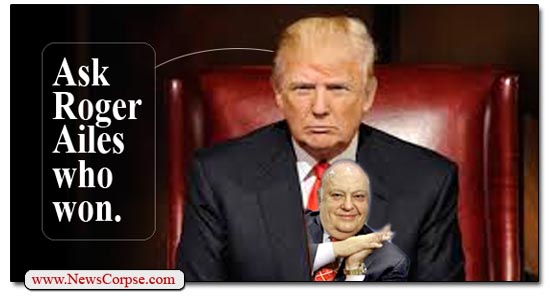 Trump’s assault on Kelly was actually proof that the criticisms of him as a misogynist were accurate. After all, during the debate Bret Baier asked the candidates whether they would support the eventual GOP nominee and pledge not to run as an independent, a question obviously aimed at Trump. Baier also asked Trump to account for his support of universal health care and other liberal initiatives and candidates, including Hillary Clinton. Chris Wallace questioned him about his evidence-less charge that Mexico was sending their criminals to the U.S. Wallace also challenged him on his four bankruptcies. All of those were uncharacteristically tough questions from Fox, but neither of the male moderators became repeated and enduring targets of Trump’s wrath.

This spectacle played out in the media, and especially on Fox News, as Fox CEO Roger Ailes came to the defense of his primetime anchor. It built to a head last week when it was reported that Trump and Ailes had spoken by phone and negotiated a truce. Trump said that Ailes was “a great guy” and had promised to be fair. Although isn’t that what Fox has been promising with it’s “fair and balanced” slogan since they launched?

Well, that fragile truce has apparently already crumbled. Trump was interviewed yesterday by wingnut radio talker Steve Malzberg. During the discussion Trump responded to the fracas with Fox and lavished praise on Ailes. However, he also latched on to an ego-driven conspiracy theory that the announcement that Kelly is taking a summer vacation is actually some sort of punishment for her alleged mistreatment of him. Fox News, of course, immediately repudiated Trump’s assertion as “wildly irresponsible” and “downright bizarre.”

The bickering continued this morning as Trump alighted in Iowa in his Trumpocopter. While taking questions from reporters on the still smoldering conflict, the Immaculate Trump insisted that he has made no mistakes and his popularity in the polls (which is a media delusion) is proof of his righteousness. When asked to comment directly he said that “I love Roger, but all you have to do is ask him who won.” That’s a direct shot at Ailes’ formidable gut. Trump is essentially bringing Ailes to heel by forcing him to admit that he is Trump’s bitch. That’s not the sort of thing that Ailes takes in stride.

With the truce broken, who knows where this will end. But there is a bigger problem here than the inflated egos of Trump and Ailes. A so-called “news” network should not be engaged in an open feud with a subject of their political coverage, even if that subject is a babbling crackpot. And a candidate for the GOP nomination for president should not be alienating the PR division of the Republican Party (aka Fox News). So this affair threatens to be detrimental to everyone involved. It’s as bad for journalism as it is for democracy. And it is a wholly Republican phenomenon.