In Washington, D.C. today, the Secret Service apprehended a disturbed man from North Dakota who claims to have come to the capital to kidnap the First Dog, Bo. On the surface this seems like a joke, but there are some very serious and sad details surrounding the incident.

The story was reported by a number of news outlets including Fox News, where the gist of the story said that…

“A search of [Scott] Stockert’s car revealed a 12-gauge pump shotgun and pistol grip, and a black bolt action rifle, neither of which were registered. Officers also found more than 300 rounds of ammunition, a machete and a billy club. He was arrested and charged with illegally carrying a rifle or shotgun outside a home or business.

“Stockert also said his parents were John F. Kennedy and Marilyn Monroe, and that he was on his way to the Capitol to try and get $99 per month health care and announce his intention to run for president. Later, he said he was Jesus Christ.”

Clearly this is a sick individual who needs professional care. He certainly is not someone who should have had access to the weapons that were found. And while it may be tempting to laugh at the Savior spawn of Kennedy and Monroe, he could have done some serious damage and hurt innocent people or police.

What’s really sad, however, is that the readers of the Fox News website may be even sicker than the would-be dognapper. Responding to the story was a flurry of offensive remarks directed at the President and his family. They ran the gamut from being insulting (including to the Obama’s children) to outright fantasies of assassination. 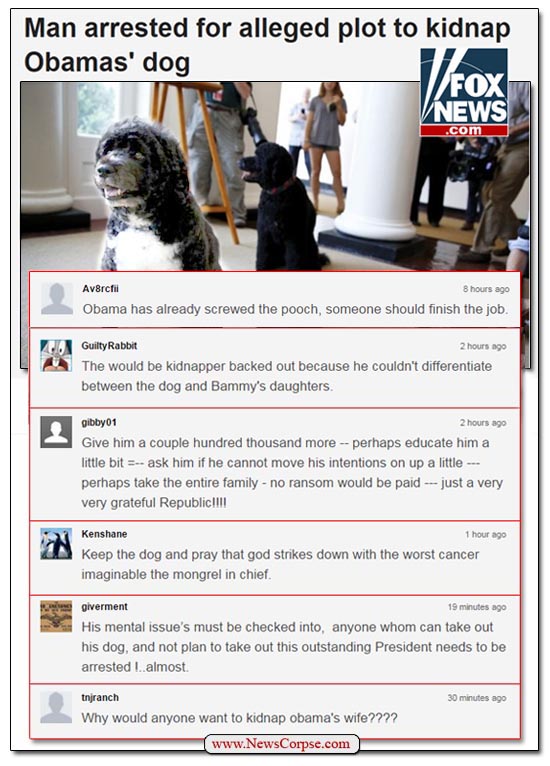 These comments are fairly typical of the Fox News community. Whenever there is story that about the First Family, you can expect that there will be disgusting statements expressing their fervent wishes for harm to come to the President and his family. News Corpse has been collecting these comments as The Collected Hate Speech Of The Fox News Community. It’s a pretty depressing display of open hostility from folks who like to characterize themselves as Christians and patriots.

It doesn’t take much to set them off either, as this story demonstrates. And it is the same expressions of hatred that are fueling the presidential campaigns of Donald Trump, Ted Cruz, and the rest of the Republican circus.