The Texas legal system delivered a sort of poetic justice yesterday when a grand jury handed down an indictment of David Daleiden, the founder of the anti-choice Center for Medical Progress (CMP), and his associate Sandra Merritt. The charges included “tampering with a governmental record” and “illegally offer[ing] to purchase human organs.” At the same time the grand jury cleared Planned Parenthood of any wrongdoing. 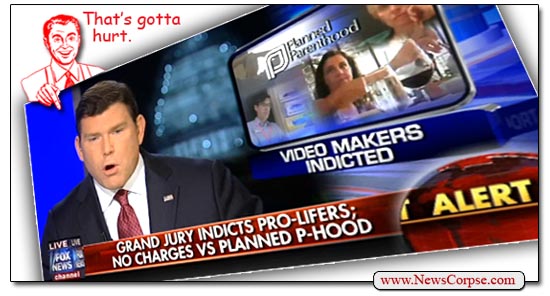 What’s surprising about this is that the grand jury was impaneled by a Republican District Attorney, who was appointed by a Republican governor, with the express purpose of going after Planned Parenthood for offences that were alleged in the deceptively edited CMP videos. From the very beginning Planned Parenthood and independent media demonstrated that the videos were flagrantly fraudulent in their depiction of the women’s health organization. And the members of the grand jury obviously agreed.

Since this news broke, conservative media has reacted with indignant fury declaring that justice was subverted by some undisclosed evil force. Never mind that the anti-choice activists were the ones who pushed for the probe and got everything they asked for in terms of its implementation. Now they are complaining that the charges against CMP are “a political hit job.” Those are exactly the words of Fox News anchor Megyn Kelly and their resident legal spinner Judge Andrew Napolitano:

They would actually be right if they were talking about why the grand jury was impaneled in the first place. But they have no rational argument for that accusation about the conclusion. It was their case, with their people, but unfortunately for them, the facts weren’t on their side.

The spectacle of having a Republican generated grand jury return indictments against the parties who sought the investigation isn’t really that surprising considering the sordid history of these particular scoundrels. CMP cut their pseudo-journalistic teeth with the notoriously dishonest video hack, James O’Keefe. The legal misadventures of O’Keefe include his having been arrested and convicted for nefarious activities in the office of a U.S. senator. He was also forced to pay a $100,000 judgement to an ACORN employee that he defamed. When a right-wing group tried to get Texas to investigate allegations of voter registration fraud the prosecutors examined O’Keefe’s video “evidence” and concluded that it “was little more than a canard and political disinformation.”

This is the predictable result of biased activists masquerading as reporters in order to produce the propaganda necessary to advance their dishonest agenda. They have no respect for journalism or ethical reporting. They are tightly focused on defaming their targets to achieve their purely political goals. And now it is clear that they are so determined to push their campaign of lies that they will violate the law to do so. Fortunately, at least this time, they got caught and are going to suffer the consequences.