In the course of his seven month campaign for the Republican nomination for president, Donald Trump has insulted all of his rivals, most of the media, and a fairly comprehensive assortment of religious and ethnic minorities. The only significant group that has escaped his bug-eyed rage has been his own constituents. Until now. 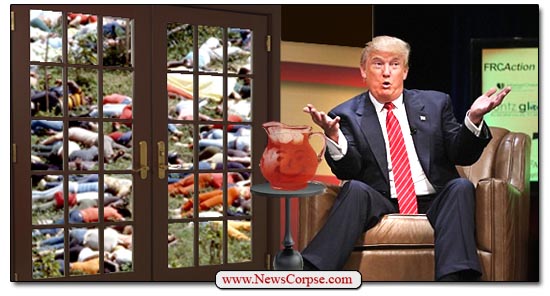 This weekend, in an attempt to brag about how loyal his followers are, he maintained that even if he were to commit a cold-blooded murder, his supporters would continue their worshipful admiration. What he said exactly was…

“I could stand in the middle of Fifth Avenue and shoot somebody and I wouldn’t lose any voters. OK? It’s like, incredible.”

There is so much wrong with this statement that it’s hard to know where to begin. First of all, it is a nauseatingly egotistical remark that affirms that he is suffering from an acute case of Narcissistic Personality Disorder. Secondly, he chose to use decidedly violent imagery to illustrate how much he thinks he is loved. But most importantly, this comment is a scathing insult to his supporters. He is asserting that they are such blindly indiscriminate meatheads that it wouldn’t matter to them if the object of their adoration were a homicidal maniac.

Sadly, Trump may be right about his glassy-eyed followers. They have already dismissed so much about his onerous character that would have driven a normal, decent human being away in disgust. They don’t care that he is a flagrant racist who has demonstrated his prejudice against African-Americans, Latinos, Muslims, and women. They aren’t put off by his promises to commit war crimes against women and children in Syria and Iraq. They let slide that he isn’t bothered by being compared to Hitler. And no matter how much he lies they just brush it off and keep applauding like slap-happy seals (See the Trump Bullshitopedia)

However, despite the evidence that Trump’s Troopers are imbeciles, they probably don’t regard themselves in that light. So why aren’t they offended when Trump characterizes them that way? This isn’t the first time either. Trump’s whole campaign insults the intelligence of anyone listening by refusing to tell them anything of substance. Instead he focuses on making nasty comments about others and boasting about his showing in the polls. It’s apparent that he doesn’t believe that his minions need to know, nor would they understand, any of those complicated details of governing. And they apparently agree.

You really have to wonder if there is something that Trump could do that would go too far for his cultish disciples. It wasn’t advocating databases to track all the Muslims in the country, who he would also require to wear ID badges. It wasn’t praising foreign dictators like Vladimir Putin and Kim Jong-Un. It wasn’t re-tweeting white supremacists. It wasn’t lying about his faith, mangling the Bible, and declaring that he has never had to ask God for forgiveness. So far, there has been nothing that Trump’s followers find revolting enough to cause them to step back. That, all by itself, considering how grotesque Trump has already been, is a pretty scary thought.

21 thoughts on “Donald Trump: If I Told My Followers To Drink Poisoned Kool-Aid They Would Do It”