Today on Fox News the network put in their rotation a chart illustrating the professions of donors to the Bernie Sanders campaign. The chart is dominated by a long bar that is labeled “Not Working.” The implication from the chart, which was backed up by the Fox News anchors who displayed it, was that donors to the Sanders campaign are unemployed, lazy, leeches on society. 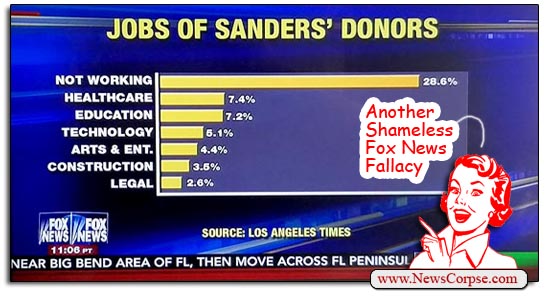 As you may already have guessed, Fox’s implied shiftlessness of Sanders’ donors is a deliberate lie. The data came from the Los Angeles Times, and while it is true that about 28% of Sanders’ donors do not have jobs, what Fox fails to disclose is that it is a group comprised mainly of retirees (13.5%), students (6.5%), and stay-at-home spouses (14.5%). So what does Fox have against America’s seniors, its youth seeking an education, and its families? If Fox were to report honestly they would have remarked on the large percentage of such honorable people who flock to the Sanders campaign.

Of course, nobody expects Fox to report honestly. And this is just the latest example of their purposeful deceit. No wonder surveys of Fox News viewers consistently show them as being the least informed, and the most misinformed, news consumers in the country. And no wonder they are supporting Donald Trump for president – perhaps the stupidest, most dishonest candidate in the nation’s history.