Here’s more evidence that the right is falling into an abyss of desperation. Donald Trump is clinging feverishly to national polls showing him as competitive. Never mind that they have no bearing on who wins presidential elections. It’s the states that deliver electoral votes and the presidency. On that scale Hillary Clinton is way ahead. The Trump camp knows this, though they will spend the next few weeks frantically trying to divert attention from it.

The latest diversions qualify as certifiably insane. Let’s begin with a charge that emanated from the bowels of Alex Jones’ InfoWars. Jones, you will recall, is a Birther, a 9/11 Truther, and believes that the children murdered at Sandy Hook were all actors. This morning he posted a story alleging that Clinton wore an “earbud” during the Commander-in-Chief Forum last night. She was supposedly being coached with answers from unseen aides off stage. The story was picked up and propelled by the Drudge Report and even Fox News who said that:

“[T]he buzz Thursday morning was more about a report claiming Clinton relied on a ‘micro’ earbud as she fielded questions about national security — a claim her campaign vigorously denied.”

Donald Trump, Jr. tweeted “We cant let Hillary get away with wearing an ear piece during tonights Veteran Forum#HillarysEarPiece#NBCNewsForum” And Fox’s Sean Hannity joined in with a post on the subject as well.

There is just one problem with this crackpottery. The video of the event contains numerous shots of both of Clinton’s ears that plainly have nothing in them. The entire fantasy was born from a single video still that had a random reflection. That was sufficient to set the wingnuts to drooling over the discovery of Clinton’s evil plot. But, see? No earbud! 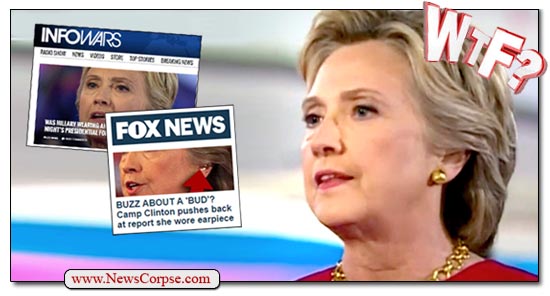 If that wasn’t enough, Fox News sought to invent another fantastical scandal involving Clinton. This one was from the warped imagination of Stuart Varney, anchor of Varney & Company on the Fox Business Network. He introduced a segment that anxiously wondered “Who is Clinton’s ‘mystery man?’” The report featured video of a well-dressed gentleman accompanying Clinton on the campaign trail. Varney asserted that social media was blowing up over who he might be. He expressed skepticism that he might simply be one of Clinton’s Secret Service agents:

“If he’s actually a member of the Secret Service detail guarding Hillary Clinton, why is he touching her, because he did, he came up on the stage the other night and put his arm around her, and then said ‘Keep talking.’ Surely that is not what the secret service is supposed to do is it?”

Varney’s guest was former Secret Service agent and frequent Fox contributor, Dan Bongino. He offered a theory from way out in right field suggesting that the “mystery man” was “responding to the stage when [Clinton] is in what may have been some kind of a medical crisis.” Varney joined in the wild speculation asking “Is he supporting her during a medical crisis?”

Judging from the video that Varney showed, the man was undoubtedly with Clinton’s Secret Service detail. And he and other agents sprung into action when something occurred in the audience. Clinton, the agent, and others on stage were all looking in the same direction into the crowd. No one appeared to be concerned with Clinton’s health by any stretch of the imagination. See for yourself:

By the end of the segment both Varney and Bongino were dismissing the whole thing as a conspiracy theory that they had just debunked. Which was nice of them after having also just invented it and broadcast it to an audience thirsty for scandal. Both surely knew there was nothing to this before they began, but they considered it too juicy not to plant in the minds of gullible Fox viewers.

Expect to see more of these nutcase studies in Clinton intrigue before the election is over. Fox and Trump will surely uncover evidence of Clinton’s involvement in the Kennedy assassination. Not to mention the Hindenburg crash and fake moon landing. This is all they have left since they nominated a narcissistic ignoramus who can’t go twenty minutes without embarrassing himself and his party.