On Tuesday, Donald Trump delivered another of his infamous harangues. He was shooting for a theme of unity, but made a statement that is pointedly un-American and discriminatory.

“We will be one people, under one God, saluting one flag.” 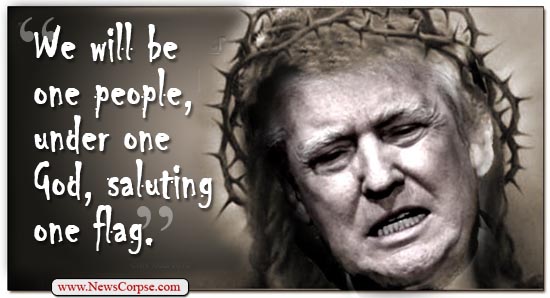 One God? And which God would that be? Trump is demonstrating his innate bigotry with the suggestion that there is a single faith in America that takes precedence over others and unites the whole nation. There may be some Jews, Buddhists, Hindus, Muslims, and a vast array of Christian sects that disagree.

Once again he proves that he doesn’t understand America, its Constitution, or the principles for which it stands. Nor does he understand the religion he pretends to practice.

7 thoughts on “Donald Trump On The Record: We Will Be One People Under One God”