The present state of the American political process is in dire distress. In order to even contemplate running for any federal or statewide office, a potential candidate must have access to sums of money in amounts that either prevent participation or invite corruption. And if there’s one thing that Washington doesn’t need it’s invitations to be corrupt.

In a new wrinkle, unprecedented quantities of funds are being raised by independent advocacy groups whose donors are allowed to be kept secret, thus depriving voters of information critical to assessing the character and independence of the candidate. The recent Supreme Court ruling in Citizens United made the situation even worse by permitting corporations to contribute unlimited amounts of money directly to candidates and causes with no transparency or oversight.

I’m not sure, however, that anyone anticipated the prospect of a media corporation turning their ability to make political contributions into a profit center and earning money on the funds they donated to candidates. It’s bad enough when media is simply acting out of greed and failing to serve the public interest. But leave it to News Corp boss Rupert Murdoch to discover a whole new vein to mine that yields results for both his greed and his megalomania.

The Nation just published an enlightening commentary co-written by media reform heroes John Nichols and Robert McChesney titled The Money & Media Election Complex. Their premise is that the confluence of media and wealthy partisans in politics is as dangerous as the military/industrial complex Pres. Eisenhower warned us about. And exacerbating the risk is the fact that, to the extent that independent reporting might once have uncovered suspicious relationships and activities, the press has been gutted in many respects and is incapable of playing their traditional role as watchdogs.

While there has long been a problem with massive infusions of cash polluting the electoral environment, the problems today are unique in the way that the media participates and benefits from the process. This past election cycle is estimated to bring in billions to the television networks airing campaign ads and hosting candidates. Thus they have a vested interest in provoking controversy and manufacturing volatility in order to stimulate more ad buying. Nichols and McChesney wrote that…

The most important yet least-recognized piece of the money-and-media election complex is the commercial broadcasting industry, which just had its best money-making election season ever. […and that…] We have to stop thinking about the crisis of our politics merely in terms of reforming the campaign finance system (though of course it’s important to fight for reforms). It’s a media ownership and responsibility issue as well.

After it was disclosed that Murdoch had contributed a million dollars each to the Republican Governor’s Association and the U.S. Chamber of Commerce, it was obvious that these ultra-partisan organizations would be using that money largely to advance the electoral prospects of conservatives and Republicans by producing and distributing television ads. And those ads would likely be placed on networks and stations specifically selected to reach a friendly audience – like maybe Fox. 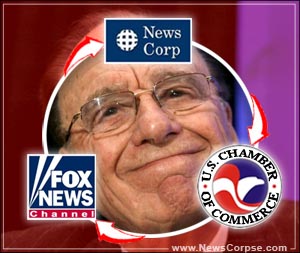 An analysis of data obtained from Media Matters reveals that one of Murdoch’s beneficiaries, the U.S. Chamber of Commerce, purchased over $20,000,000 in ads on local broadcast stations across the country. In five of those markets (three in the top ten) there are one or more stations owned by Fox Television. On those stations the Chamber bought $1,223,770 in ads. That means that News Corp earned $223,770 in profits on their million dollar donation to the Chamber.

Looking at this another way, News Corp gave the Chamber a million dollars to buy ads with. Then the Chamber gave the money right back to News Corp with 22% “interest.” So News Corp makes a healthy profit and the Chamber gets their ads broadcast for a 78% discount. And both get to further their shared political agenda. Remember also that the revenue on the analysis above is just from Fox-owned broadcast stations. It does not include ad buys on the cable Fox News Channel. Nor does it include revenue from any other recipient of Murdoch’s largesse, like the Republican Governor’s Association. So there may be millions more in earnings from these allegedly benevolent contributions flowing from the Murdoch media empire.

The fact that this is apparently legal is disturbing, to say the least. It is a thinly disguised kickback scheme. If any other company were to seek to inflate their balance sheet by covertly providing funds to a vendor so that the vendor could purchase that company’s products, somebody would be going to jail. How is this any different? In this scenario News Corp gets to book the revenue, the Chamber gets to air their ads, and the public is subjected to propaganda designed to sway the election. And because of the weakness of the press and the perversion of the current campaign finance legal landscape, the public is also precluded from learning about any of it.

There is the making of a crime syndicate in all of this. Murdoch is not the only media mogul who can employ this scheme. Throw in Richard Mellon Scaife and Philip Anshutz and a variety of other TV, radio, and newspaper barons, and there is potential for significant manipulation and deception through collusion between wealthy media corporations and powerful political operators.

The lesson here is that the media is in need of serious reform, along with campaign finance regulations. If these matters are not addressed adequately, we can expect to see more severe and more frequent corruption of our democratic processes. This is an issue that requires our nation’s immediate attention. And it’s an issue that should be pursued by a true nonpartisan alliance of Americans devoted to fair elections and a free press. The media and political bosses exploiting these loopholes think that the people are too lazy and/or stupid to notice and to challenge them. Are they right?