These are boom days for conspiracy theories. You can’t swing a dead cat without hitting one. And who do you think killed the cat? Hmm? 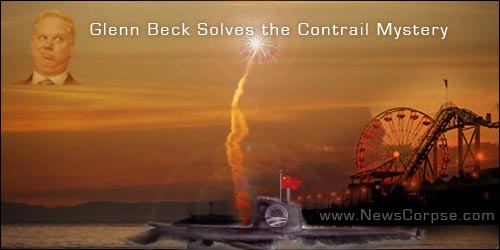 Now we have the debut of the Contrailers. Let me have Contrailer Creator Glenn Beck explain it to you:

Did you see the story today about the Chinese missiles and military? How many submarines they’re buying and how many missiles they have? And how they can destroy everything here in America with their missiles?

Who launched that missile? Do you thinks it’s the military? I told you when that happened I don’t know enough about missiles.

Oh I do now. Oh I do now. And I talked to some military experts who know all about missiles.

What they’re telling you on television is bullcrap.

I mean I lived in Florida. I’ve seen space shuttles launch before.

Come on. Two stage missile. That’s what that was.

Beck goes on to offer his theory for what the mysterious trails were:

There you have it. China somehow managed to navigate a submarine into the Los Angeles harbor without anyone catching on. Then they fired off an ICBM into the Pacific. And they took that risk and expense in order to emasculate the President. Makes perfect sense. Except for this.

You do know that insanity runs in his family, don’t you?