For several weeks the media has fixated on emails associated with Hillary Clinton and the Democratic Party. Some of them were obtained by anti-Democratic organizations and Republicans in Congress. Others were stolen by hackers affiliated with Russian intelligence operations. Now, if the story reported by BuzzFeed pans out, the GOP may get a taste of their own medicine. 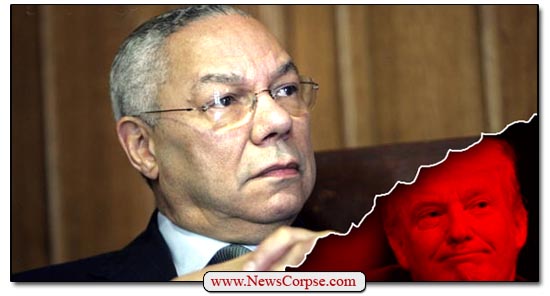 Personal emails from former Secretary of State Colin Powell have been obtained by BuzzFeed News. Among the revelations in them is his assessment of Donald Trump as “a national disgrace” and an “international pariah.” BuzzFeed writes that:

“The remarks came in a June 17, 2016, email to Emily Miller, a journalist who was once Powell’s aide. In that same email Powell also said Trump ‘is in the process of destroying himself, no need for Dems to attack him.'”

Powell is not just a former Secretary of State. he is also a retired four-star general, Chairman of the Joint Chiefs of Staff, and was National Security Adviser to President Ronald Reagan. His reputation took a hit when he shilled for George Bush’s invasion of Iraq, but as a Republican icon of international diplomacy he is without peer. For him to dismiss Trump in such potent terms could have a significant impact on right-leaning Republicans and independents.

Additionally, Powell’s emails revealed his disgust for the Birther movement which he described as racist. In fact, he said that “the whole birther movement was racist.” With respect to Trump’s leading role in it, Powell wrote “When Trump couldn’t keep that up he said he also wanted to see if the certificate noted that he was a Muslim.”

Powell even commented on Trump bringing disgraced former Fox News CEO Roger Ailes into his campaign. Ailes, you recall, was ousted from the network he founded after numerous women came forward with complaints of sexual harassment. Powell made the cogent observation that “Ailes as an advisor wont heal women.” And he criticized the overall press coverage of Trump saying “You guys are playing his game, you are his oxygen.”

[UPDATE] Additional reporting has revealed another fascinating email from Powell. In this one he says that “Benghazi is a stupid witch hunt.”

Colin Powell continues to be a respected figure in the Republican Party and more broadly across a swath of independents. Until the release of these emails his opinions of Trump were not publicly known. Trump will surely renounce Powell as a dummy and loser, and his supporters won’t be moved by these criticisms. But Powell is expressing the views of many conservatives who are troubled by Trump’s ignorance and repulsed by his bigotry. Only time will tell if enough of them are dissuaded to prevent a Trump victory from bringing shame to our nation.