From the start of his campaign Donald Trump has promised to “make America great again.” Central to that marketing slogan is his claim that he will bring jobs back to the U.S. from China, Mexico, etc. The hypocrisy of that claim is well established with evidence that his clothing and other products are mostly manufactured in the very countries he attacks. 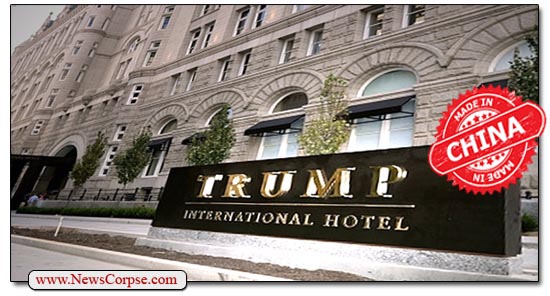 Today Trump invited some of his closest friends to tour his new Washington, DC, hotel in what he called a “soft opening.” The press was not on the guest list. However, a photographer from the liberal American Bridge PAC did make it into the swanky digs and documented something that Trump failed to mention. There are numerous furnishings and accessories in the hotel that were made in China and other foreign countries. For instance:

The Trump Hotel is filled with items that were made everywhere but America. Here, a lamp made in China. pic.twitter.com/emyAg8yxLY

Inside the Trump Hotel in Washington, DC: an ice bucket made in England. pic.twitter.com/RhouJXY7eB

Inside the Trump Hotel in Washington, DC: a Trump Hotel bathrobe, made in China. pic.twitter.com/nxrLG7VfMN

Inside the Trump Hotel in Washington, DC: bedding made in China, not the USA. pic.twitter.com/lmI5MpBKm4

The king-sized beds inside the suites at the new DC Trump Hotel were – you guessed it – not made in the USA. pic.twitter.com/rH3FBLmjJy

This dresser was made in the Philippines, far and away from the USA. pic.twitter.com/MtU7mx9dfc

A very classy gold lamp in the new DC Trump Hotel, which just happens to have been made in China, not in the USA. pic.twitter.com/wZAloIuNEu

Even these Trump Hotel branded umbrellas are made in China, not here in the U.S.. pic.twitter.com/aw4q5nj8H8

Dana Milbank of the Washington Post also sneaked into the tour and found some more interesting examples of Trump’s deceit. Among other things was this spiritual amenity:

“I came across the Gideon bible in the nightstand with a note on ‘TRUMP HOTELS’ stationery:

‘If you would like to continue your spiritual journey, we also offer the followings (sic): Talmud. Quran. Gita. Avesta. Tripitaka (Pali Canon). Shri Guru Granth Sahib. Book of Mormon. Kindly contact Housekeeping should you wish to have one delivered to your room.'”

So Trump is providing Qurans to his hotel guests. They might be underused in a Trump administration since he isn’t allowing any Muslims into the country. However, any domestic Muslims will be able to find solace in their stay at the Trump hotel while (in the minds of Trumpsters) they plot to blow it up.

What’s more, Trump can be expected to staff his new establishment with foreign workers, just as he has done at his Mar-A-Lago resort in Florida. When pressed to explain why he didn’t hire Americans, Trump whined that “it’s very, very hard to get people in Palm Beach during the Palm Beach season.” Of course it is. What America would want to work in a ritzy resort on the Florida shore?

How any of this brings jobs back to America is a mystery. But it does conform to Trump’s pattern of behavior. Say whatever will warm the cockles of his dimwitted followers, then do whatever benefits him. It’s further proof of his singular focus on his own self-interest and his shameless hypocrisy.