Let’s face it, the media has very little to brag about lately. It has been embarrassingly inept in its coverage of the election. It lets Donald Trump get away with a torrent of lies unseen in modern times (see the Trump Bullshitopedia). Simultaneously, it harps on Hillary Clinton’s alleged scandals despite the absence of any evidence of actual wrongdoing. 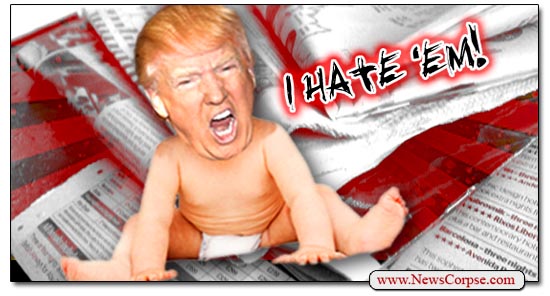 Consequently, it should come as no surprise that a new poll by Gallup reveals that trust in the media has sunk to historic lows. Gallup’s survey asked people “how much trust and confidence” they have in the mass media to report the news “fully, accurately and fairly.” The respondents who said “a great deal” or “a fair amount” totaled to only thirty-two percent. That’s the lowest score in over forty years that Gallup has been asking this question.

The cause of the decline becomes more apparent when the numbers are broken out by political affiliation. Gallup notes that “Democrats’ and independents’ trust in the media has declined only marginally.” Since last year those groups have fallen four percent and three percent respectively. However, Republicans have taken a dive of mammoth proportions, dropping twelve percent. Says Gallup:

“With many Republican leaders and conservative pundits saying Hillary Clinton has received overly positive media attention, while Donald Trump has been receiving unfair or negative attention, this may be the prime reason their relatively low trust in the media has evaporated even more.”

This part of Gallup’s analysis may be true so far as the perception of Republicans is concerned. As a group they are notoriously whiny about what they believe is unfair reporting. However, as a matter of fact it is demonstrably false. A study by Harvard University’s Shorenstein Center on Media, Politics, and Public Policy showed that from the start of the campaign “Trump’s coverage was positive in tone — he received far more ‘good press’ than ‘bad press.’” The same study showed that “Clinton had by far the most negative coverage of any candidate.” And people wonder why Clinton is wary of the press. But there is another reason Republicans lost faith in greater numbers. Gallup highlighted it saying that:

“It is also possible that Republicans think less of the media as a result of Trump’s sharp criticisms of the press.”

Bingo! Donald Trump has taken a sledgehammer to the media from day one. He has complained relentlessly about a perceived bias by a press corps that has shamelessly coddled him. They air his repetitive stump speeches in full and uninterrupted. They fall for his stunts designed to draw more attention to him. They even admit that they cater to his whims because they are addicted to the ratings they think he generates. CBS CEO Les Moonves famously said that “It may not be good for America, but it’s damn good for CBS.”

Even worse, Trump frequently disparages reporters personally. He calls them dummies, losers, sleazy, and scum. He points at them viciously during his rallies while spitting insults and “joking” about killing them. An NBC reporter once had to be escorted to her car by Secret Service after a rally due to threats from Trump’s hostile followers.

There are plenty of reasons to be skeptical of the media. It is a humongous industry controlled by a few monolithic, multinational corporations. It often pursues its own self-interest rather than the interests of the public they purport to serve. However, the delusional rantings of Donald Trump and his surrogates in no way justifies a loss of trust for the press. His unhinged rage is representative of a paranoid diversion from reality. And unfortunately, the damage he does to the public’s relationship with the media will far outlast this election season.