It’s two weeks after Labor Day, the date generally regarded as the commencement of the campaign season. The conventions are behind us and voters are said to be paying attention to the candidates. So it makes perfect sense that just as people are taking this race seriously, Hillary Clinton would appear on “Between Two Ferns” with Zach Galifianakis (video below). 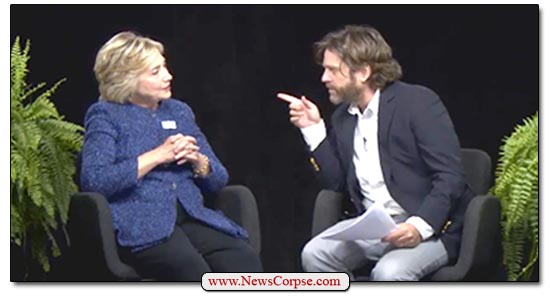 Not generally recognized for her sense of humor, Clinton rises to the occasion and gives Galifianakis every bit as much as he gives her. The segment begins with a question that sets the tone for the remainder of the sketch:

Galifianakis: Critics have questioned some of your decision making recently and by you doing this show I hope it finally lays that to rest.
Clinton: Oh I think it absolutely proves their case, don’t you?

Galifianakis hits on all of the most pressing issues of the campaign. He asks about the historical significance of Hillary being the first “girl” president, not to mention the first white president for many young Americans. He challengers her on the Second Amendment. And he boldly raises the prospect of her losing the Scott Baio vote, something no mainstream journalists have had the courage to address. Galifianakis also explores the intricacies of Hillary’s wardrobe and her famous pantsuits.

Donald Trump is not neglected in this interview. Galifianakis wanted to know what he might wear during the debates. When Hillary speculated that he would probably wear his customary red “power” tie, Galifianakis offered that it might instead be a “white power” tie. He also pressed Clinton on campaign strategy asking:

“When you see how well it works for Donald Trump, do you ever think to yourself ‘Maybe I should be more racist?'”

When the discussion turned to the economy, Galifianakis interrupted for a message from the program’s sponsor. I won’t say who that was, but you might be able to guess. Then he closed with a reference to Clinton’s email “scandal.”

Edgy comedy showcases like this are an effective way to reach the elusive Millennial demographic with which Clinton has struggled. President Obama used it to great effect, including taking a spin between the same two ferns in 2014. Conservatives freaked out whenever Obama appeared on such programs and complained that it was “unpresidential.” That’s a criticism that would sound ludicrous coming from Trump.

However, these outings often humanize a candidate and reveal an ability to laugh at themselves. Clinton has a well enough established reputation for serious policy analysis that she can safely engage in some comic relief. It wouldn’t hurt her to do more of it. Trump, on the other hand, has yet to demonstrate that he grasps the seriousness of the office he seeks. He stubbornly refuses to offer any specifics as to how he would accomplish his outlandish campaign promises. Mexico isn’t paying for a wall that he isn’t going to build anyway. ISIS won’t be defeated overnight. The deficit isn’t going to shrink after his tax cuts for the rich, they are going to balloon by over five trillion dollars. And he isn’t going to end all street crime in America.

Although there is one area in which Trump has succeeded which may obviate the need for him to do shows like this. He is already perceived by most Americans as joke.

UPDATE: The co-creators of “Between Two Ferns” spoke to the Washington Post about the Clinton interview. It’s a really interesting bit of background that reveals in part that…

“…she was actually super warm and funny during the making of it. After one of the jokes, she let out a big laugh that put us all at ease. This one, compared with the Obama one, was much more improvisational. We didn’t clear most of the jokes through her people.”