It may come as a surprise to learn that Fox News has policies governing the ethical behavior of their employees. Over the years the network has brazenly promoted Republican politicians and pundits without regard for either fairness or balance. But the blurry lines they draw were recently crossed by primetime host Sean Hannity. 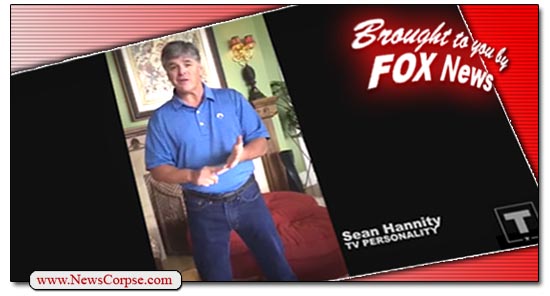 Hannity taped a tribute to Donald Trump that appears in a new web ad. Curiously, he is identified only as “Sean Hannity, TV personality.” Not only did they leave out his Fox News affiliation, but they reduced him to the status of Kim Kardashian or Ryan Seacrest. In the clip Hannity unequivocally states his support for Trump and outlines his reasons why.

“One of the reasons I’m supporting Donald Trump this year is number one, he’s going to put originalists on the Supreme Court. People that believe in fidelity to the Constitution, separation of powers, co-equal branches of government. He’s a guy that will vet refugees to keep Americans safe. And of course he’s gonna build that wall. He says he’s gonna have Mexico pay for it. That’s fine, as long as we secure the country and, of course, we don’t want people competing for jobs. He said he will eliminate Obamacare, make us energy-independent, and as somebody who’s been a marksman since I’m 11 years old, protecting our Second Amendment rights are paramount to me.”

This list of right-wing tripe is typical of the propaganda that Fox and Hannity regularly dispense. Nothing in it varies from the conservative politics that dominate the network. What’s unusual is that Hannity delivers his testimonial in an official Trump advertisement. Along with fellow asshats like Ted Nugent, Hannity plants a wet kiss full on the mouth of his hallowed hero. Unfortunately, he failed to get permission from his Fox bosses before contributing his services. That reckless disobedience resulted in Fox News taking swift disciplinary action:

“We were not aware of Sean Hannity participating in a promotional video and he will not be doing anything along these lines for the remainder of the election season.”

Well, that ought teach him. While distancing themselves from Hannity’s impropriety, Fox firmly forbade him from further misconduct. And that appears to be the extent of his punishment. He wasn’t suspended. His pay wasn’t docked. There doesn’t even seem to be a demand to remove his segment from Trump’s ad. What’s more, they gave him permission to continue his partisan antics after the election.

This absence of consequences isn’t the least bit peculiar. Why would Fox News punish Hannity for doing in an ad what he does everyday on his program? Hannity has publicly endorsed Trump. His show has hosted Trump more than any other program on television. Tonight, in fact, he’ll be holding his third “town hall” wherein Trump is given the full hour to advance his candidacy. Hannity’s role in these infomercials is mainly to toss Trump softballs that he often answers himself. Or, at least, polishes the frequently moronic answers Trump serves up.

As the election season proceeds, Fox News is frantically escalating their Trump crusade. On the air they are deploying ever more hysterical Trump surrogates. The Fox News website is fully engaged in PR for Trump. Their Twitter feed is brazenly distributing professionally designed pro-Trump memes (see this collection). They couldn’t be more engaged in the campaign without registering as a PAC, which technically they ought to do anyway.