In the past few weeks there have been some shocking stories about Donald Trump’s connections to foreign politicians and financiers. Especially Russian leader Vladimir Putin and figures associated with Russian mobsters. The media glosses over these alliances, even though they would have doomed the electoral prospects of any other candidate. If Hillary Clinton were linked to such shady characters they might start calling her “crooked.” 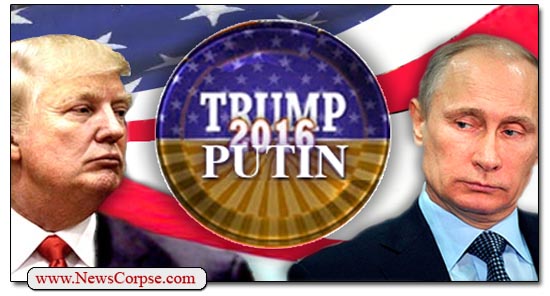 Consequently, it was left To Clinton to raise the issues that the press fails to properly cover. A post on her website enumerates a few of the inquiries that ought to be at the top of every journalist’s agenda. Here is a summary of her concerns:

1. What’s behind Trump’s fascination with Vladimir Putin?
Trump is on record praising dictators from some of the world’s most brutal regimes, from Kim Jong-Un to Saddam Hussein. But his praise for Russia’s president is the most extensive and the most adoring.

2. Why does Trump surround himself with advisers with links to the Kremlin?
Trump’s top adviser and campaign manager Paul Manafort built his political career as a lobbyist for international dictators, rebel groups, and human-rights violators. […] Manafort isn’t the only Trump adviser with a cozy relationship with the Kremlin.

3. Why do Trump’s foreign policy ideas read like a Putin wish list?
Trump’s talk of “America First” isolationism worries our allies, threatening the alliances that have kept America strong and safe.

4. Do Trump’s still-secret tax returns show ties to Russian oligarchs?
Unlike every other major party presidential nominee for the past 40 years, Trump refuses to release a single tax return—you have to ask yourself “what’s he hiding?”

5. Why is Trump encouraging Russia to interfere in our election?
Russia has a known history of interfering in foreign elections, and there’s now extensive evidence that they’re doing just that in the United States.

6. Is Trump’s pro-Russia stance the result of his business ties to Russia? And what is he going to prioritize as president: our national security or his business interests?
Trump has worked to keep his business dealings a secret (as of today, he still refuses to release his tax returns). But reporters at ABC News uncovered a bombshell: Trump has profited from hundreds of millions of dollars from Russian interests.

The affinity Trump shows for hostile foreign dictators is more than a curious quirk of personality. It would pose a dangerous conflict of interest and an overt threat to national security. Question #3 in particular requires further examination. The fact that Trump’s agenda could serve as a to-do list for a Putin lobbyist should not be dismissed. Trump actually went on a Russian controlled TV network and took Putin’s side against America. And Trump’s stubborn unwillingness to be forthcoming about any of this only deepens the mystery.

The man who could be your next president may be deeply indebted to another country. Do you trust him to run ours? pic.twitter.com/5TU9olTqd5

THIS JUST IN: U.S. intel officials probe ties between Trump adviser and Kremlin.

“U.S. intelligence officials are seeking to determine whether an American businessman identified by Donald Trump as one of his foreign policy advisers has opened up private communications with senior Russian officials — including talks about the possible lifting of economic sanctions if the Republican nominee becomes president, according to multiple sources who have been briefed on the issue.”