As if the nation needed another reason to be nauseated by Donald Trump’s ignorance, intolerance, and insensitivity. This morning Trump spoke before a meeting of the Retired American Warriors PAC, a right-wing superPAC created less than two months ago by Trump supporters. Trump delivered some prepared remarks via the TelePrompter he once said was disqualifying, then took some questions from the decidedly friendly audience. 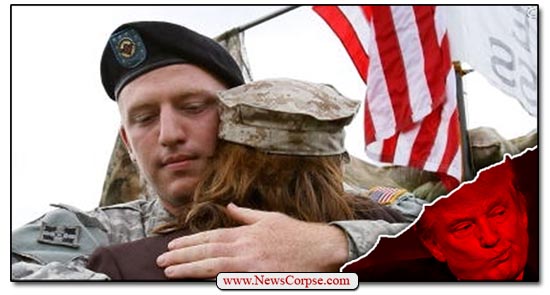 One of the questions addressed the problems associated with veteran suicides and mental health issues like PTSD. The gentleman asking the question framed it as an advocacy of faith-based solutions. Trump ignored that and went straight to a tone-deaf and insulting response:

“When you talk about the mental health problems, when people come back from war and combat and they see things that maybe a lot of the folks in this room have seen many times over and you’re strong and you can handle it but a lot of people can’t handle it.”

Well, that’s revealing. Apparently Trump believes that veterans suffering from PTSD are too weak to handle the horrific aftermath of their wartime service. In his view soldiers who performed courageously, but who were traumatized by what they experienced aren’t strong enough to handle it.

That is the sort of callous commentary that could only come from someone who evaded military service with four deferments and a medical disqualification. You have to wonder how veterans with PTSD will feel when they hear a candidate for president saying this. It certainly won’t promote their recovery and wellness to know that they are thought of as weak.

In other remarks at the event Trump blatantly dodged a question about what his plan for defeating terrorism would be. He also insulted the whole of the military by characterizing it as “depleted.” This is a theme he has made a staple of his campaign that also regards America as less than great. It’s a theme that includes an aversion to soldiers who were captured (i.e. John McCain). Candidate Trump has belittled American military leaders by claiming that he knows more about ISIS than they do. And he held a phony telethon to raise funds for vets, but ended up stiffing them.

It’s unfathomable that, after all of that, anyone in the military could support Trump for president. His ignorance of, and disdain for, the nation’s armed services ought to be of concern to all veterans and active duty soldiers. What’s more, his utter failure as a businessman should worry anyone who thinks that he might have solutions to problems in the military infrastructure or world affairs.

This new display of contempt is only the latest evidence of his unfitness to serve as president and commander-in-chief. It will be interesting to see if the media bothers to report it and put his candidacy in the proper context.

One thought on “Where’s The Outrage? Trump Maligns Soldiers With PTSD As Weak ‘People [Who] Can’t Handle It’”