Donald Trump’s Twitter feed has been a cornucopia of comedy, curiosity, and horror. He uses it to brag about himself, insult his foes, and spread disinformation. He has even suggested altering the U.S. government’s policies on international relations in ways that make experts tremble. 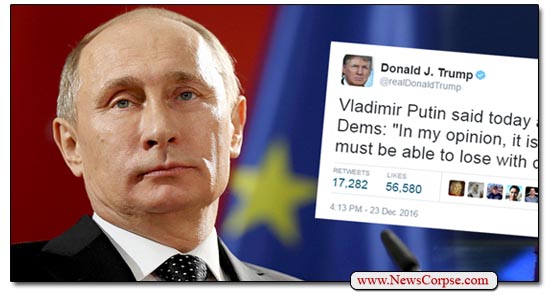 The latest tweet from the President-Elect takes a disturbing stand alongside Vladimir Putin (again):

Vladimir Putin said today about Hillary and Dems: "In my opinion, it is humiliating. One must be able to lose with dignity." So true!

This deceptively simple comment raises a couple of red flags (pun intended). First of all, why is Trump taking advice on democracy from a murderous dictator? Putin is widely known for assassinating his political rivals. What’s more, Russia is not exactly a model of free and fair elections. Putin doesn’t have to worry about losing with dignity because he doesn’t have to worry about losing at all. By complimenting Putin’s remarks, Trump is validating his undemocratic dictatorship.

Secondly, since when has Trump ever lost with dignity. Or won with dignity, for that matter. In 2012, Trump went on an unhinged Twitter tirade following Mitt Romney’s loss to President Obama. He said it was a “disgusting injustice.” a “travesty,” and called for a revolution. And in a complete reversal of his current position, he said the Electoral College was “a disaster for a democracy.”

Just a couple of months ago, Trump demonstrated his dignified approach to democratic participation. He said “if I don’t win, this will be the greatest waste of time, money and energy in my lifetime.” And after winning the Electoral College he’s done nothing but whine about losing the popular vote by a historic margin.

Trump’s tweet did not go unnoticed by the Twitterverse. Here are few select examples of the barrage against his foolish and unpatriotic embrace of Russia’s tyrant:

Mr. Pres-elect, is it necessary to cite as an authority on democratic norms a thug whose regime commits war crimes and murders journalists? https://t.co/aSmMyxvrLY

Just an FYI, Putin has all of his elections rigged. Like, actually rigged. https://t.co/YmqeSpHt78 https://t.co/tAWjoXXjAo

@realDonaldTrump I agree. You lost the popular vote, so take his advice and lose with dignity.

You’re tweeting Vladimir-freaking-Putin. The KGB master is coming to your defense and you’re proud of this? Have you no dignity whatsoever? https://t.co/aOf7GuoUtV

Joining a Russian dictator in mocking an American is disgusting. https://t.co/9N3t5DV3kA

@realDonaldTrump Clinton conceded and has gone hiking for a month. You're still whining about *winning*.

Republican leaders must condemn @realDonaldTrump's alliance with Putin, a foreign adversary who is actively undermining our democracy. https://t.co/7q0OkzNF2T

@realDonaldTrump Do you have any other pearls of wisdom from foreign dictators? What do you think Pol Pot would say about Hillary?

You empty-suit, empty-souled fuck. You're quoting a man who poisons his political opponents, murders critical journos. No dignity for them. https://t.co/QnIGcMLVZX

.@realDonaldTrump Who's a good boy? pic.twitter.com/y4hh12ABCv

Before Trump lectures Americans on democracy, he might want to find a better source of democratic wisdom. Somehow, a totalitarian who oppresses his people and kills unfriendly politicians and journalists doesn’t make the grade. And his observations on dignity only make him look more callous, ignorant, undignified.

3 thoughts on “So Now Trump Is Applauding The Dictator Putin’s Observations On Democracy?”