Last week reports surfaced alleging that Monica Crowley had plagiarized significant parts of her 2012 book, “What The (Bleep) Just Happened.” Ironically, that title poses a good question considering that her publisher just announced that it’s pulling the book from publication:

“The book, which has reached the end of its natural sales cycle, will no longer be offered for purchase until such time as the author has the opportunity to source and revise the material.” 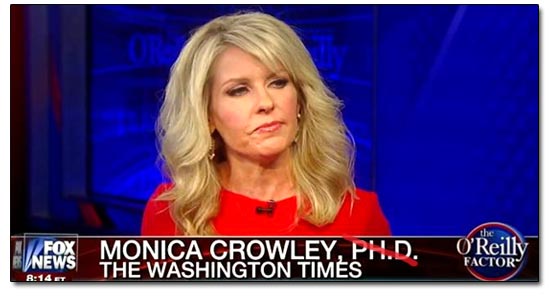 Donald Trump recently nominated Crowley to be the strategic communications director of the National Security Council. She was previously a contributor for Fox News. CNN’s Andrew Kaczynski identified more than fifty instances of text that was lifted in whole or in part from other sources. The “borrowed” words came from newspapers, magazines, websites, and even from a colleague at Fox News. After publication of the expose, Trump’s transition team called it a politically motivated attack and said they stood by Crowley.

Now the publisher, HarperCollins, has concluded that the allegations have merit. It should be noted that HarperCollins is owned by Rupert Murdoch’s News Corporation. Murdoch is also the owner of the parent company of Fox News. CNN reached out to Trump’s team again for an updated response but did not immediately receive one.

In addition to this news, the Trump people have to deal with allegations that Crowley also plagiarized portions of her doctorate dissertation. According to Politico:

“An examination of the dissertation and the sources it cites identified more than a dozen sections of text that have been lifted, with little to no changes, from other scholarly works without proper attribution. In some instances, Crowley footnoted her source but did not identify with quotation marks the text she was copying directly. In other instances, she copied text or heavily paraphrased with no attribution at all.”

With the removal of Crowley’s book from publication it seems impossible for Trump to continue to dismiss this as partisan. Rupert Murdoch’s publishing company isn’t part of a Democratic cabal. Crowley’s fate would be sealed in any other political context. But Trump’s operation has been rife with impropriety, dishonesty, and a determination to double down when faced with adversity. So it’s anyone’s guess where Crowley will be tomorrow. After all, Trump’s wife Melania was also caught in a plagiarism scandal, and she’s still around.