Thursday morning Republicans rolled out a presentation of their long-awaited alternative to the Affordable Care Act (aka ObamaCare). It came in the form of a lecture by Speaker of the House Paul Ryan. He stood before the class and gave a PowerPoint aided speech that supposedly spelled out everything you might need to know about the GOP plan. 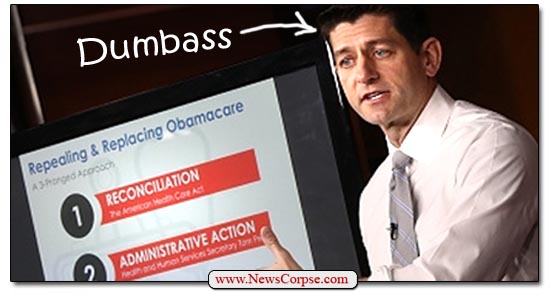 There was just one problem. Well actually, way more than one. But in the broadest terms the single most problematic part of Ryan’s lecture was that it made no sense whatsoever. It failed to address how it would cover everyone who is presently covered. There were no financing specifics to explain how it would be funded. But the most prominent flaw in his presentation was that it revealed that he has no idea what insurance is. Nor does he have any notion of how it works. Ryan summed up his criticism of ObamaCare saying that:

Let that sink in. What Ryan is saying is not that ObamaCare doesn’t work, but that the whole concept of insurance doesn’t work. Every insurance product, whether it’s for healthcare or auto accidents, operates on the same principle. Many people pay into a pool that is used to cover the costs of the unfortunates who suffer a loss. Insurance depends on the fact that most policy holders will not have a claim (i.e. healthy people). Therefore, their premiums pay for folks who do have claims (i.e. the sick or injured).

Paul Ryan doesn’t seem to grasp that concept. To demonstrate the depth of his confusion, he offered a little example:

“Here’s our solution. Let’s just make sure we cover the people who have preexisting conditions. Make sure reinsurance or risk pools kick in for those four people in that small business that get cancer. Subsidize that coverage and what you do by doing that is you dramatically lower and stabilize the price of insurance for everybody else.”

Let’s break that down. Ryan says that the practice of insuring people by having many people contribute to a risk pool is going bankrupt. He might want to run that by the multi-billion dollar, highly profitable insurance corporations for confirmation. Then he proposes that only the sick people get federally subsidized insurance. That leaves the population of healthy people with lower premiums. That’s actually true. And it makes the insurance companies wealthier because they are only covering people who don’t need any coverage.

But Ryan doesn’t say where the government would get the money to pay for the cancer patients in his scenario. Ordinarily those funds would come from the healthy people that he just removed from the picture.

So one of three things would happen. Either the government would have to bear the total cost of healthcare for America’s sickest population and incur massive debts. Or everyone would have to be taxed to finance the coverage for those patients. Or the sick people would just die. Ironically, there is a germ of a real solution in there. Universal healthcare would provide all Americans with coverage and spread the costs so broadly across the populace that the premiums would be easily manageable.

But that’s not what Ryan and company are proposing. They want to give all the healthy people cheap insurance and burden the sick with unpayable bills. That’s the solution that is being advanced by Republicans in Congress and has already been endorsed by President Trump. If you have the intestinal fortitude, you can watch the entire presentation by Ryan and see if it makes any sense to you. If not, stay away because intestinal maladies are not covered in the GOP plan.

9 thoughts on “Paul Ryan’s Health Insurance Seminar Proves One Thing: He Has No Friggin’ Idea How Insurance Works”