Much of the media today is over-indulging the White House’s short-term success in crippling ObamaCare. Never mind that the American people support it and today’s House vote is not expected to be repeated in the Senate. It’s a “W” in Donald Trump’s column that they are exploiting to the max. 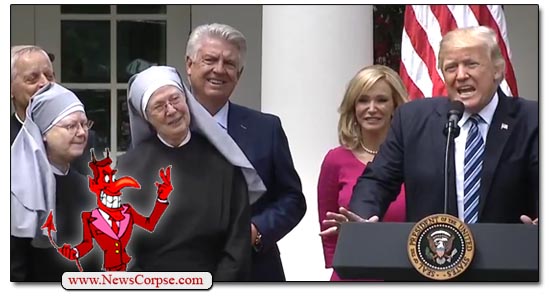 What is not being talked about is the executive order Trump signed earlier on Thursday. The purpose of yet another Trump executive order is being sold as an attempt to promote “Free Speech and Religious Liberty.” In reality it does neither. The language in the order itself betrays its true intent. It says that it:

“…protects the freedom of Americans and their organizations to exercise religion and participate fully in civic life without undue interference by the Federal Government.”

“…[mandates that] the Department of the Treasury does not take any adverse action against any individual, house of worship, or other religious organization on the basis that such individual or organization speaks or has spoken about moral or political issues.”

Taking a closer look at these objectives reveals something far more ominous than what the Trump administration suggests. The actual impact of the order is to allow religious institutions to use their tax-exempt status to advocate for political campaigns and policies. It attempts to reverse the “Johnson Amendment” which many faith leaders support. It also permits businesses to discriminate against individuals they regard as incompatible with their religious beliefs.

For the most part, the executive order is merely window dressing on the right’s Christian supremacy. It doesn’t alter existing law at all, which would require an act of Congress. Instead, it directs federal legal authorities to refrain from enforcing statutes that actually protect equal treatment under the law. In other words, businesses that refuse to service gays (or Muslims, or whoever) will get a free pass for prejudice. Churches that openly engage in political activity will not have their tax-exempt status reviewed by the IRS. Employers will be able to force their religious beliefs on employees (such as refusing contraceptive healthcare coverage) with impunity.

It should be noted that current law does not prohibit anyone from exercising their right to religious expression. Any business owner is free to express their beliefs so long as doing so does not infringe on the constitutional rights of others. Any representative of a religious institution can speak out on politics so long as it is not done in a facility that receives federal tax exemptions. If pastors want to turn sermons into political speeches they can simply decline tax-exempt status. Many people believe that the policy that grants religious organizations freedom from taxation should be revisited as an historical anachronism. But no one argues that political organizations should conduct their business tax-free.

Trump’s statements at the signing of the executive order (video below) were vaguely patriotic while disguising overtly prejudicial intent. “No American,” he said, “should be forced to choose between the dictates of the American government and the tenets of their faith.” He continued:

“We will not allow people of faith to be bullied, targeted, or silenced any more. And we will never ever stand for religious discrimination. Never ever.”

That coming from the same man who issued an executive order banning all Muslims from entering the country. Trump’s idea of religious freedom is limited to those who practice the American brand of Christianity. He supports business owners who seek to discriminate against gays. But he would oppose any business that insisted that all female patrons cover their heads. He also said that:

“For too long the federal government has used the power of the state as a weapon against people of faith, bullying, and even punishing Americans for following their religious beliefs.”

In reality, the federal government generally tries to insure that the practice of religious beliefs don’t infringe on anyone else’s liberties. The only bullying evident was by radical Christians who tried to prevent the construction of Mosques in their communities. What Trump is bothered by is the free exercise of beliefs by people who don’t subscribe to his faith.

This point was made clear in an open letter by more than 1,000 faith leaders who oppose Trump’s executive order. Their letter said in part that:

“Although it purports to strengthen religious freedom, what this order would actually do is misuse this freedom, turning it into a weapon to discriminate against broad swath[e]s of our nation, including LGBTQ people, women, and children in foster care.” […]

“The religious freedom upon which our nation was founded has allowed our country’s diverse religious landscape to flourish. The draft executive order flies in the face of that rich diversity by enshrining one religious perspective – on marriage, gender identity, health care, and the role of houses of worship in partisan politics – into law, above all others. This is neither what religious freedom means in the eyes of the law, nor what religion itself means to millions of Americans of faith.”

Trump’s attempt to govern by executive order, something he lambasted President Obama for, is typical of the authoritarian tendencies he has long exhibited. And in this case he is going beyond conventional authoritarianism to full fledged theological tyranny. Expect this executive order to suffer the same fate as his others that were overturned in court. The ACLU has already announced a court challenge.

[Update: The ACLU released a statement saying that they are declining to bring a suit at this time because Trump’s EO is “an elaborate photo-op with no discernible policy outcome” and is “fake news.” I don’t entirely agree, because a threat of non-enforcement still constitutes unequal treatment under the law. However it’s fun to see the ACLU essentially call Trump an impotent doofus]

President Trump: "We will not allow people of faith to be targeted, bullied or silenced anymore" https://t.co/QR4gCcA6q7