Much has been made of Donald Trump’s rise to the presidency from the ranks of reality TV game show hosts. And that surely was a dumbfounding development, with an emphasis on dumb. However, it is less often mentioned that Trump is also a former Fox News personality. He had a regular weekly phone-in segment on Fox & Friends called “Mondays with Trump.” Now that he’s in the White House the lines between Fox News and the Republican Party continue to blur. It’s often difficult to tell the players a scorecard. 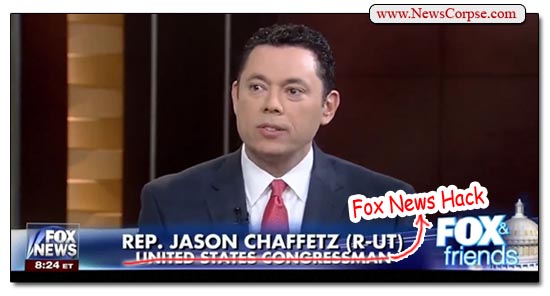 This weekend a new report surfaced that offered an explanation for the sudden retirement announcement of Jason Chaffetz. The Republican chair of the House Oversight Committee recently disclosed that he would not be running for reelection. Sources also speculated that he would resign before his current term ended. The only explanation that Chaffetz himself provided was the familiar desire to spend more time with his family.

Now his GOP colleagues are revealing that Chaffetz has confided in them what he intends to do after leaving Washington. According to the Washingtonian:

“Chaffetz has been telling people he’ll take on what one source calls a ‘substantial role’ in on-air talent at Fox News Channel, possibly as early as July. […] ‘Let’s just say that when Jason told us he was headed to Fox, no one was surprised,’ says one senior House Republican aide.”

What is meant by “substantial role” is unclear, but implies that he will have more to do than guest commentaries. Perhaps he is angling for his own show. That would make him the third Republican politician to host a program on Fox News. Previously Mike Huckabee and John Kasich anchored shows even as they pursued elected offices. Chaffetz would be in the same position as he is expected to run for governor of Utah in the future.

Along with Huckabee and Kasich, Chaffetz would be following a well worn route from GOP politician to Fox News personality. Others include former House Speaker Newt Gingrich, Massachusetts senator Scott Brown, and Sarah Palin. The list gets longer when you include party operatives like Karl Rove, John Bolton, and Dana Perino.

And the rumor mill is churning new speculation that Trump is looking for even more Foxies to adorn his White House. Unhappy with his current communications staff, Trump is said to be interested in hiring producers from his favorite network. Even Press Secretary Sean Spicer isn’t safe. Trump insiders are telling the media that he’s souring on Spicey and “wants Fox News host Kimberly Guilfoyle to take his place.”

The symbiotic relationship between Fox News and the Republican Party is making it difficult to tell where the GOP ends and Fox begins. Is Fox the PR division of the GOP? Or is the GOP the operational unit of Fox News? It hardly matters. The bottom line is that they have effectively merged into a single entity. Fox CEO Rupert Murdoch is openly backing the Trump administration, and Trump is repaying the favor with nearly exclusive access and free advertising on Twitter. It’s a match made in Hell for America and what remains of its free press and democracy.

3 thoughts on “REPORT: Chaffetz Is Ditching His Job Spinning in Congress to Do It Professionally on Fox News”