The controversy over Donald Trump’s firing of FBI Director James Comey continues to unfold. And the President insists on making matters worse with comments that are implicit admissions of impeachable offenses. For instance, Trump told NBC’s Lester Holt that he asked Comey if he was a subject of an FBI investigation. He also asked Comey to pledge an oath of loyalty and threatened him with releasing secret tape recordings. All of these could be regarded as ethical breaches sufficient to warrant an impeachment inquiry. 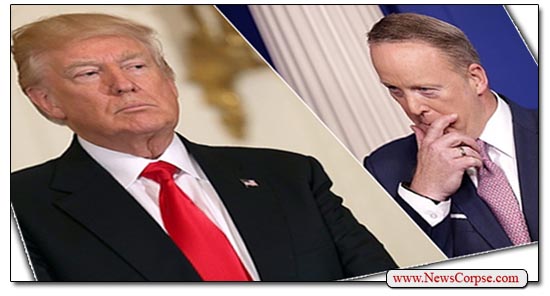 While the core story is as disturbing as anything that’s come out of Washington in decades, there are spin-offs that are equally unsettling. Among them are recent reports concerning the toxic status of Trump’s White House Press Office. Sean Spicer and company have been taking a severe beating over their inability to communicate a consistent, coherent message. They have lost credibility among their peers and, apparently, their bosses as well. On Friday Jeanine Pirro of Fox News asked Trump if Spicer’s job was secure. He pointedly declined to give a straight answer.

Trump is so upset that he actually proposed eliminating the daily press briefings and communicating via Twitter. He also suggested that he might just hold weekly press conferences by himself. An article in the Associated Press noted that Trump “increasingly sees himself as the White House’s only effective spokesperson.” While the absence of regular press avails would ordinarily be an unprecedented insult to the public trust, in the case of this White House it hardly matters. Very little of substance, or truth, is derived from their daily get-togethers.

Now there are reports that Trump is sending out feelers to reshape his press operation more to his liking. In the same AP article there was a line that revealed where Trump’s thinking is headed for the near future:

“Trump is mulling expanding the communications team and has eyed hiring producers from Fox News, according to one White House official.”

That should fix everything. When your press office isn’t lying well enough, get yourself some professionals to do it. For the record, Trump has already tapped Fox News for several administration appointments. Former Foxies on the White House payroll currently include K.T. McFarland, Ben Carson, Sebastion Gorka, Heather Nauert, Richard Grennell, and Jonathan Wachtel. There has never been an administration that was so packed with people from a major news enterprise. And now that’s going to get even worse.

Among the rumored changes is one that predicts the departure of Press Secretary Sean Spicer. Trump insiders are telling the media that Trump “wants Fox News host Kimberly Guilfoyle to take his place.” Guilfoyle was an attorney who is currently a co-host of Fox’s right-wing gab-fest, The Five. She has never been a journalist and has no experience in press relations. That surely won’t bother Trump who regards inexperience as an asset. Trump may also appreciate Guilfoyle’s admiration for Vladimir Putin, who she thought would be a better president than Barack Obama. And if you don’t believe the anonymous sources speculating about Guilfoyle, the story broke two days earlier on Alex Jones’ Infowars. So that should settle it.

By bringing in Fox News producers and presenters, the White House press office would take on a new identity as an overtly partisan purveyor of propaganda. So one might ask, what’s the difference? Well, it would also cement Trump’s image as a TV character who relies on the fakery of entertainment values over honest journalism. And it would reinforce the relationship between Trump and Fox, which is already a marriage of political convenience and ideology. But most of all, it would abandon any hope of securing the respect of the American public or the world at large. It would turn the press office into a punchline. And considering that the Trump administration is already a bad joke, they don’t really have that far to go.